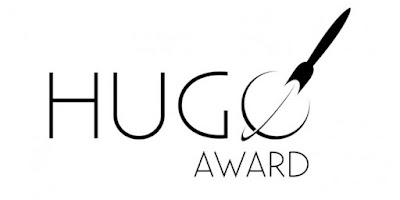 Towards the end of this period we enter the time when I began to read voraciously, this being a typical reaction of those who find SF and fall in love with the genre.  In my case I remember picking up two of Robert A. Heinlein's juveniles from a shop while on a seaside holiday in Ilfracombe.  It was one of those wet summer's, which meant we couldn't go to the beach, and I was bored.  The books I bought were the Red Planet and Farmer in the Sky, followed by me picking up the two other books of his that the shop had on its racks: Tunnel in the Sky and Time for the Stars.

From this point on I pursued books by him and other authors like him: Andre Norton, Alan E. Nourse and Hugh Walters.  And that is how this SF fan was born.  As for the Hugo awards, my eleven year old self would have been too deep into reading books to have taken any notice of some boring event where you had to sit and watch been adults wearing fancy clothes being given prizes.

As before I shall be referencing the Hugo Wikipedia page here.

The one's I haven't read are: Dark Universe by Daniel F. Galouye, The Fisherman aka Time Is the Simplest Thing by Clifford D. Simak, The Sword of Aldones by Marion Zimmer Bradley, Little Fuzzy by H. Beam Piper, Sylva by Jean Bruller, Witch World by Andre Norton, Dune World by Frank Herbert, The Whole Man by John Brunner, Davy by Edgar Pangborn, Too Many Magicians by Randall Garrett, The Witches of Karres by James H. Schmitz, Day of the Minotaur by Thomas Burnett Swann, The Butterfly Kid by Chester Anderson, Thorns by Robert Silverberg, Rite of Passage by Alexei Panshin, Past Master by R. A. Lafferty, The Goblin Reservation by Clifford D. Simak, Tower of Glass by Robert Silverberg, The Year of the Quiet Sun by Wilson Tucker, Star Light by Hal Clement, A Time of Changes by Robert Silverberg.

What surprised me about the books I haven't read was how many Robert Silverberg novels there were.  He's an author who I thought I'd read more of, but there you go that's what your memory does, it deceives you.  Again there's nothing on this list that makes me want to rush out and buy them, though I may well get around to the Hal Clement at some point.  From this I think I can see some indications of the sort of books I like to read, and those that don't appeal.

I'm rather hard pushed to list alternatives who may have deserved a Hugo during this period, because of the selection of nominated works rather takes away any point in doing so when you consider my criteria:  I must have read the book, and the author hasn't had an award or nomination.

First thing I want to say is that obviously if any of the books I haven't read struck a chord that would make you recommend them to me, then please leave a comment below.

Secondly I just wanted to add how I choose the books I read nowadays.  First is through recommendations from friends or from reviews I've read, but the main route is through the bookshops.  When I go into Forbidden Planet I look at their new book selection.  First the cover, then the back page blurb, and finally the first chapter.  This turns new books into the equivalent of a publishers slush pile, which is why word of mouth and reviews are so important.

If the cover has a woman on it with an elf, werewolf or vampire I'll probably pass, because this signals paranormal romance, but I always check the blurb first just to make sure.  Romance books are not my thing.  I've read a bunch, even read some by accident, it's just my taste in stories.  Same goes for horror, unless tentacles as in Cthulhu; I always have time for the Great Old Ones.
Posted by  Ashley at 15:14