A Year On, A Reflection on Six Months

Last year I did a six-month reflection of my writing progress. You can compare and contrast what I said then to now by going here.

Like last year I've written a bunch of pieces for the Galactic Journey blog, which is in the running for Hugo this year.


The Big Freeze (news from a UK fan)
Still Snowing (an update on UK fandom)
March of Progress (the movie, Come Fly With Me)
Bully for Conventions (BullCon: The 1963 EasterCon)
More wooden acting (The British show, Space Patrol)
Damned if they do (the movie, The Damned)

This year I've been back writing full-time, though with caveats, as the writing also covers being my own publisher, which is something new I had to learn. Learning new stuff takes time, and I fear that I'm not as quick a learner as I imagine myself to be.

And I've got to admit, my energy levels aren't what they once were.

Anyway, I tallied my weekly running totals and double checked my figures against my two works in progress numbers. There was a slight mismatch, it seems I wrote a couple of thousand words more than I recorded.

Still, whether it's 68,000 words or 70,000 words, it really doesn't make a big difference in the greater scheme of things, as I've failed to meet my daily target that would've reached my target of 195,000 words.

However, I note that this is still more new words in six months than I wrote for last year. So a win for me since I have another six months to write more words.

Lost three weeks just down to life factors that were outside of my control. Far too many hospital visits both for myself and my partner who I accompanied for her tests, and results.

Editing Strike Dog and doing a structural edit on Ghost Dog. The former to Americanize the spelling, the latter to address pacing issues (stodgy middle). Both of these books took far more time and effort than I would have thought. Worse still, doing this put me into the wrong head-space to write creatively. They just did.

So, now I shall take my excuses outside and put them out of their misery.

Despite all of the above I did write some new words. I've started Two Moons, which means I'm 10,728 words into my next Gate Walker novel; a sidequel to the main Tachikoma narrative.

My ability to write a story in less drafts has improved. I think it would be fair to say that both my Alpha reader and my primary Beta reader have noticed a marked change in my writing.

I still intend to have completed three novel equivalents this year. I'm half way through the year and I've done one, and I've started on the second. Getting the third requires a Plan B, which mostly boils down to getting my fingers out and write more.

But if I fail to meet my target, at least I will have written a bunch of new words.
Posted by  Ashley at 19:46 No comments:


This has being doing the rounds, so I thought I'd post a link here for reference. My first thought was transformable wheels for combat armor suits. But you probably guessed that, given how mad keen I'm on mecha.
Posted by  Ashley at 15:32 1 comment:

Billed as the Comau MATE – HUMANufacturing experience, this system would make a good basis for the various exoskeleton suits in my Gate Walker series. As is it would be a good start for the Light Mobility Suit used by my civilian characters, and the technology would be the basis for the PACE and MARPACE suits used by the military.

Just a few years ago this would have seen as being out of reach, but now it looks like technology is creating a future where exoskeletons will be everyday items, like cars, boats and planes.
Posted by  Ashley at 11:29 No comments: 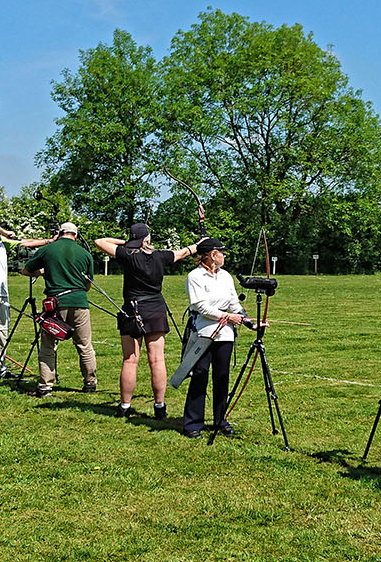 I took up archery a couple of years ago. I've always had the thought in the back of my head that I would do Japanese archery, but as I've got older I've become less inclined to put up with the Zen mysticism of Japanese martial arts as practiced in Britain.

Don't get me wrong. I have a lot of respect for those that do Japanese martial arts, and I practiced Aikido for 16 years, and Iaido for three, so this is just me saying as I've got older I've become a bit more cussed in outlook.

I was talking to my partner about having changed from shooting my bow from right-hand to left-hand, and the difficulty I had shooting the Hereford at this year's Whiteleaf competition, which the above picture was taken at.

Last year I scored 482 points, this year 336. That looks, because it is, a drastic difference. But, when I checked my score sheets the real difference lay in the scores at 80 yards. My results for the 60 and 50 yard distances were almost identical: three points in it (175 last year versus 172 this).

And that is true of writing stories too. Transitioning from a writer with their first novel to one who has a second out, and soon a third novel is a learning process. And part of that learning process is practice. And as one practices one learns new ways of doing things.

So, while I'm not meeting my word targets, what I am managing is a reduction in the number of drafts and revisions I need to make to get a piece of writing finished. I'll take that as a win.
Posted by  Ashley at 13:02 2 comments: 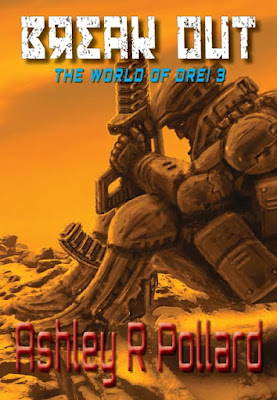 I'm happy to announce that Break Out, story three in The World Of Drei series is now available to buy on Amazon.


Defeated, Lieutenant Morozova and Sergeant Rozhkov get the chance to rest and recuperate. Refitted with state-of-the-art equipment they must be the eyes of a newly formed battle group. The point of the spear.

The third story of a future Russian civil war set in the World of Drei universe, "Break Out" delivers combat-grade military action revealing how human camaraderie grows in the face of terrifying adversity.

If you've not yet read any of the stories in this series then all of The World of Drei stories can be found here.

Important Note: If you already have a copy of this series, I've updated the text. If you wish to have the new version, go to your digital library, there you will see on the far right side of the screen, opposite books that have been updated, a button that says "Newer version available."
Posted by  Ashley at 09:32 No comments: 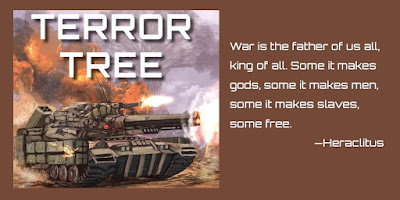 Very interesting. The character is an AI. Looking forward to more from Ashley

Very interesting. The character is an AI. Looking forward to more from Ashley. She is a very talented writer and story teller.

I really enjoyed this short story, the writer was able to bring the cold logical voice of the AI into the narrative and tell a story in the first person, which is no mean feat.

the reader is left wondering about the back story of this conflict as we only see it from the tanks perspective as it returns to combat, learning more and more on each occasion.

the first chapter of the next book, that is included has also wet my appetite and I'm looking forward to finding out more about this universe

An interesting POV take on where the future of AI driven armoured combat could go.

Particularly apposite with the recent news that Russia's military has a new armed robot tank (the Nerehta, which can be fitted with a 12.7mm or 7.62mm machine gun or an AG-30M grenade launcher) that outperformed manned vehicles in recent exercises, Colonel Oleg Pomazuev told the Russian news site Military Review, as well as Russia's taking a hard-line on the United Nations' proposed ban of Lethal Autonomous Weapon Systems (LAWS).
Posted by  Ashley at 09:28 No comments: