This week we've been watching Person of Interest, which was recommended to us by my friend John Medany.  It has sucked us both in and we've been watching three episodes a night.  The cast is excellent too and Michael Emerson who plays Mr. Finch is incredibly good.  I also like the female Detective Carter played by Taraji P. Henson who looks and feels to me like a real woman.  Great writing that both inspires me to do better and makes me feel totally inadequate to the task at the same time.  My recommendation is that you just throw your money at the computer screen and buy it now.  Come back and finish reading this blog later.

Went to see Pacific Rim, and you can read my perspective on the film here.

Reading wise I started Charlaine Harris's the first book in the True Blood series; Dead Until Dark.  Enjoying it, and it certainly makes a change from what I usually read; it's light and fluff and doesn't require anything deep from the reader.

I'm also reading a non-fiction book recommended to me by my friend Alex Stewart of Ciaphas Cain fame, on plot structure.  Called Into the Woods by John Yorke it has so far proved to be an excellent read, but I find myself reacting quite strongly to the outdated Freudian psychology used to talk about character motivation.  I will probably do a fuller overview when I've finished and given it some more thought.

Well after fifteen weeks I have finished the first draft of Strike Dog, the second of three novels I plan to write.  I found myself going through a steeper learning curve than during my first novel Bad Dog, because the structure and plot were more complicated this time round.  I now feel a bit empty as I write this, and need some time to recharge the creative juices.  So my plan is to catch up on some reading and then start the third novel, Ghost Dog, in a couple of weeks time. 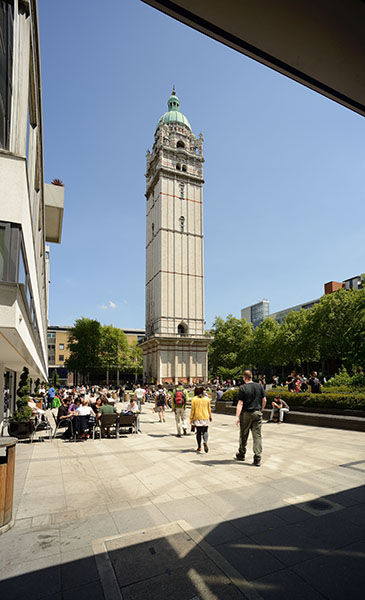 Ah yes four days off from writing that was still like work, for definitions of work that means requires effort from one.  So Monday I wrote 1327 words, which brings the total on the second novel up to 90,664.  So the end is in sight.

The rest of the week I was at the British Association for Behavioural & Cognitive Psychotherapies annual conference held this year at Imperial College London.  So on Tuesday I attended a workshop Implementing Emotion-Focused Techniques in Schema Therapy led by Jeff Young, which was very useful.  The room was rather too well air conditioned, so we all rushed out in the breaks to warm up in the sweltering heat of the hottest week of the year in London.

Other things I went to were number of key note speeches and several panel discussions that were very thought provoking, and I may well write about on my CBT blog.  The most useful being a talk on the Integrated Volitional/Motivational Model of suicidality.

Didn't really read much this week, though I did watch some episodes from the Japanese animation series Ghost in the Shell, which I will no doubt talk more about next week.  So Monday it is my nose back to the grindstone to try and finish Strike Dog.
Posted by  Ashley at 14:52 No comments:

Email ThisBlogThis!Share to TwitterShare to FacebookShare to Pinterest
Labels: Anime, Other Stuff, Writing-WIP 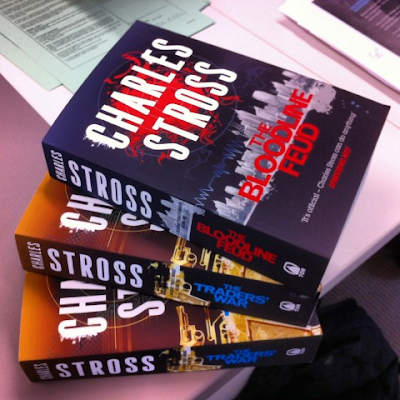 Last week I left you all with the comment that I had started reading The Merchant Princes series by Charlie Stross that has just been reissued in three fat volumes by TOR.

I really, really enjoyed the first book, called The Bloodline Feud, and plowed straight into the sequel The Trader' War that left the plot on a cliff hanger that sucked me into the third book The Revolution Trade.  So be warned that these three books are real page turners that leave you wanting more.

It cost me two days writing this week as a result, which is not a bad thing, but is a thing.

I liked the story, the characters and the machinations of the various factions.  What I didn't like was that at the end I was left wanting more, but I've just read that he has been commissioned to write three more books in the series. Yay!

I so want to know how the Miriam, Erasmus and James Lee relationship goes in New Britain.  I want to know what happened to Paulie and Mike?  Does Donald Ramsfield destroy the world?  Colour me excited.

Since my partner was reading the Stross books too, I ended up starting another book so we could sit reading together on the couch, rather than watch a film, or TV show together.

I had bought the latest Larry Corrria Monster Hunter Legion, which is the fourth book in the series.  Another real page turner about people who hunt monsters for a living.  It's a real hoot, and Larry has a way of making me break out in laughter with his one line wise cracks.  I love the character's too.

Another series that leaves you wanting more.

As can been seen from the above I spent a lot more time reading this week and the only film we watched was Guy Ritchie Sherlock Holmes: A Game of Shadows.  This was another excellent outing for the steampunkish version of the Holmes franchise.  I have a fondness for both Downey's and Cumberbatch's versions of the great detective, as they both bring different things to the table.

Great story telling and dialogue too.  What's not to like?

Finally, only three days writing done this week, so I feel like a bit of a slacker with only 7,863 words done, which brings the running total to 89,330.  So I'm on the home stretch now.  What has been interesting, on reflection, is that I've had to work my way through what some call second novel syndrome, and what I've learned is that the craft comes from practice.

So that's it for another week, as I sit sweltering in my flat with the aircon on to start cooling down the room.  Next week I'm at a CBT conference for four days, so another week where I don't expect to get a lot of writing done.  Catch you on the bounce. 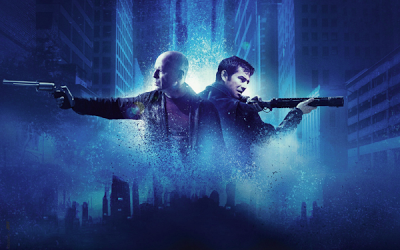 Running a bit late this week due to spending the weekend in sunny Cambridge at my friends Kate & Malcolm's summer BBQ.  I also sloped off writing last Thursday and Friday and read instead, which was naughty of me too.  Need the break though, but this week must get back into the saddle and finish the novel.

First rule of writing finish what you start.

Stuff I watched this week included Despicable Me, WALL.E and Looper, all of which are well worth spending your valuable time watching.  Bruce Willis was very good at being himself in a story that had his older and younger versions of his character playing the antagonist and protagonist of the story.  Very clever.

Book wise I was entrapped by Mr. Stross, damn you Charlie for writing a page turner I couldn't put down.  I started reading The Bloodline Feud, which is the omnibus edition of the first two books of The Merchant Prince series.  The whole series is now available in three volumes from TOR books.  It is I understand a revised and edited version that is the author's preferred text.

All I can say is that this series has sucked me in, and I am now on book three.

My writing this week has therefore been reduced by the above diversion.  Still I managed to write 4,776 words, bringing the running total up to 81,465.  So I'm in the home stretch on my second novel.