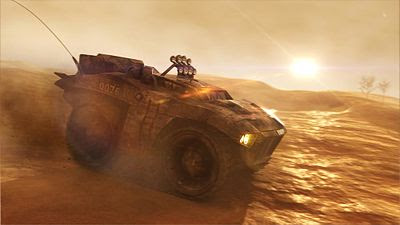 Welcome to part three where I talk about the other military science fiction series I think are good because I have read them more than once.  Again in no particular order of preference:

I read the original Dorsai trilogy at an early age –  and later followed Dickson's expansion of the core books into the Childe Cycle.  To brutally honest the expanded universe books do not stand up to repeat readings, but Tactics of Mistake, Soldier Ask Not, and Dorsai! are favourites of mine.  There's also Lost Dorsai and The Spirit of the Dorsai, which are two collections of shorts stories and a novella, which are OK, as in worth reading once.  However, they share the problem I have with the Childe Cycle of being works where the author's ambition to write about progress versus conservatism resulted in them forgetting that stories have to be interesting beyond the message.

I have a love hate relationship with the Posleen series by John Ringo, which actually should be called the Aldenata series, but everybody I know who reads these books remembers the Posleen: ravenous aliens that call-back to the Mongol Hordes.  However, my love, hate relationship is down to the technology rather than any heavy handed message.  I just have a failure to suspend my disbelief when Ringo describes light speed velocity shots being fired inside the Earth's atmosphere.  Despite that throwing me out of the world I find myself enjoying the adventures of the various groups, and who can forget the crew of the massive tank called Bun Bun fighting the Posleen with nuclear shells.  I also like Tom Kratman's Watch on the Rhine, but it's not to everybody's taste, especially those who don't get black humour.

Freehold is the first book by Michael Z. Williamson, and while the libertarian message is front and centre I can forgive it because the story has characters that one can root for, and the rest of the series: The Weapon, Rogue, and Contact with Chaos are well worth reading; with the latter being particularly good because of its outstanding portrayal of a civilized society restricted by the limitations of resources to stone age technology.  In fact I would go so far as to say that the idea of a society restricted by its technology that is forced to work within the limitations of it means is pure SF at its best.  I can also recommend his Ripple Creek series for SF private military contractor action.

Finally, Stark's Crusade by Jack Campbell, a pseudonym of John G. Hemry, was an early trilogy of novels written before the Lost Fleet series took off and propelled him into the big league (a definition for this being sells lots of books).  Stark's Crusade is the only series of his that I've re-read, which is why it is here in my list.  What makes this series stand out for me is the matter of fact way things go wrong in the first novel that marked the stories out as trying to say something different about military operations.
Posted by  Ashley at 16:27 No comments: 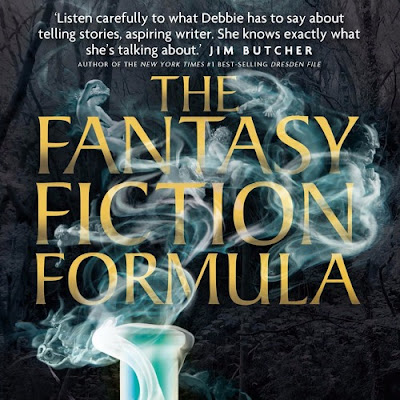 This was one of the books I took with for my holiday in Provence, though I saved it for last, because I chose to read it as part of my interest in developing my writing, so work not fun.  However, the book was a revelation and I wish it had been published four years ago when I first started writing.  Though this assumes that I would have had the sense and wit to make the most of it back then, which is not a given.

Deborah Chester is the person who Jim Butcher learnt to write under.  For those of you reading this and thinking writing to a formula is somehow wrong, stop and put your assumptions to one side.  The formula referred to in the title is the list of things that a novel needs if it's going to work as a story.  In short, this is a book about the craft rather than the art of writing.

I'm now using it to help me work through my second novel and it has also helped me to understand the feedback I received that said my first novel was not straightforward enough.  What I can do to address this feedback is limited by my writing ability and all I can do is work at upping my game.

For anyone who is writing I can wholeheartedly recommend reading this book.
Posted by  Ashley at 16:38 No comments:

Once I Was Young and Computer Savvy 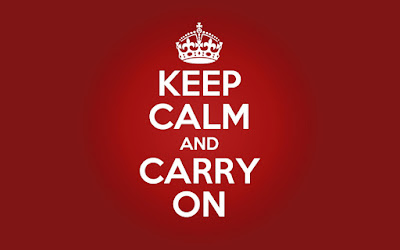 My first job with computers was circa 1974 when they were vast machines that occupied air-conditioned halls, tape decks were a thing, and programs were entered using punch cards.  Home computing was Sinclair ZX81s and I aspired to owning an Apple II, but never did.  My first computer being an Apple Macintosh, which I got in 1988.  The late eighties and early nineties I was there at the forefront of home computer use and could walk into a design studio and sort out SCSI cabling issues with aplomb.

After nearly twenty years of having the same internet service provider I find myself having to set-up a new email address, and as a result change my FaceBook, Amazon, eBay and other account settings.  To say that this has been frustrating is an understatement.  I've been reduced to shouting at my computer in frustration, which on a scale of one-to-ten rates about an eleven for pointlessness.

And don't get me started on spam filters that sent every confirmation email into a special place that would only appear after repeated logins to my new domain.

To add to the total joy, I also find that my blogger contact forms won't update to send emails to my new address, even though I've changed the email setting, and furthermore, to make my life especially miserable, the blog lost all the links on my blog list.  And then there's Yahoo, where I'm forced to change the address of each list I subscribe too individually.

And I used to take such things in my stride.

Then this morning Susan's car wouldn't start, because the battery had died.  My truck is currently in Aldershot being serviced and getting its MOT, so this was the icing on the cake of a very stressful week where I've not managed to do any work on my novels.

The good news is that I guess that sometime next week my friends will receive an email from me with my new address.  Ah the bliss!
Posted by  Ashley at 19:53 5 comments: 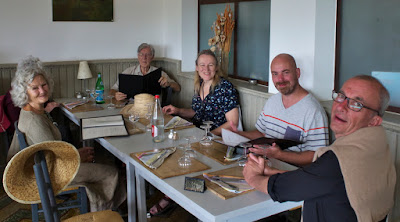 We've been to Provence, courtesy of my friend Holly's parents, who so generously invited us to come over and stay with them for a week.  They spoilt us rotten with good food, excellent wine and took us out for a dinner in Gourd. 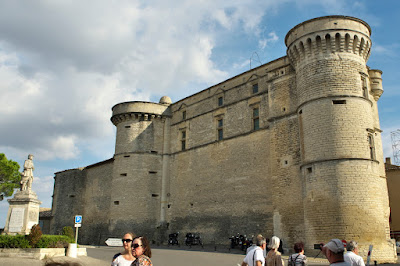 To help us digest the feast we wandered around the fortified town.  Exploring the path attackers would have to take to force their way into the town in the Middle-ages. 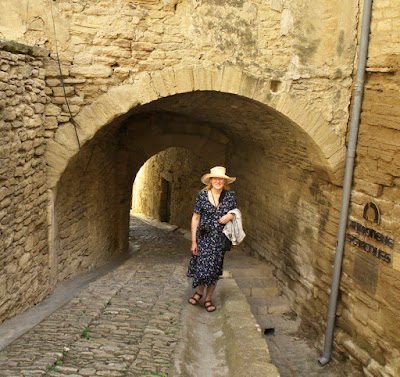 We also went to Lacoste. 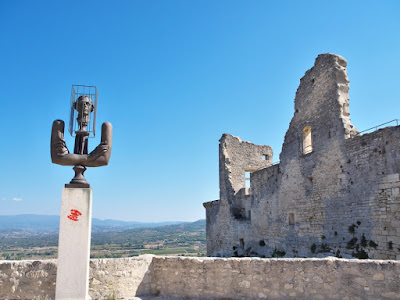 Lacoste is where the infamous Marquis de Sade had his castle.  We walked down from the ruins through a labyrinth of stone passageways, exploring the nooks and crannies in the hot sunshine. 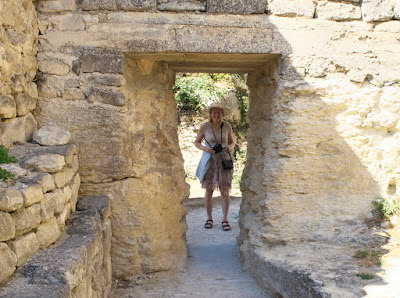 The map shows the ruined castle, where we started, and we went right through the town to the bottom left and back around to visit the church too. 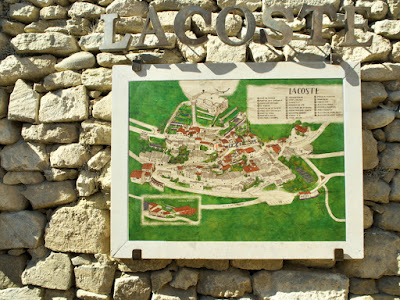 Then Holly bought us lunch at the Café de France, which was delightful.  Afterwards Susan was fair tuckered out by all the walking. 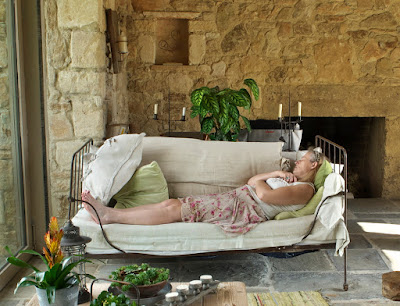 You can read about the Medieval Faire we went to in Venasque here.

During the rest of our holiday we managed to swim almost every day, with Susan taking delight in wearing her favourite pink bikini. 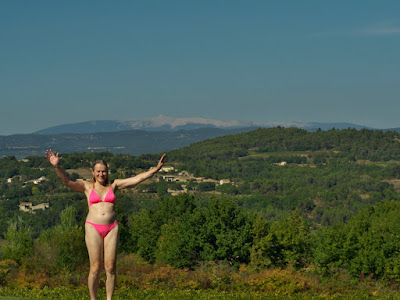 Also, while relaxing, and being away from the internet I was able to sit and read some books, which I shall review in passing in due course.  But of course all holidays have to end.  Too soon it was time to travel back on the superfast Eurostar for our return home. 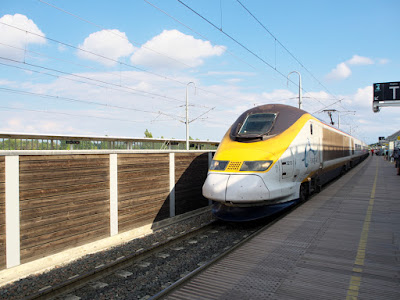