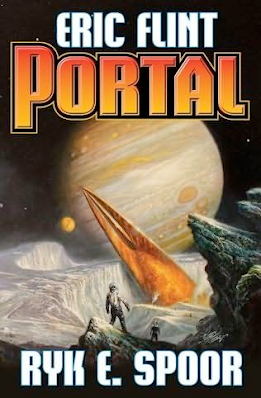 Portal by Eric Flint and Eric E. Spoor is the third book in the Boundary series.

Boundary is the first book in the series.  The story starts with an archaeological dig finding the fossilized remains of aliens.  Apparently they were killed by a bunch of Raptors when they landed on Earth 65 million years ago, which places their death on what is called the KT boundary.  This discovery leads to sending a mission to Mars, where the discovery of a base on Phobos then leads to further discoveries of a base on Mars.

Needless to say the race is on to exploit the alien technology.  Threshold, the sequel to Boundary,  takes the story to Ceres, and then on to Jupiter, ending with the expedition stranded on Europa.

So I was keen to read Portal, and find out where the story would go next.

The series is unashamedly traditional old school science fiction.  While it may not have won any awards, the story of finding the alien Bemmies (bug eyed monsters), makes for a fun read.  The story has dinosaurs, squid like aliens, and spaceships.

What more can one ask for?  I certainly wanted to continue turning the pages to find out what happened next?

Meanwhile we are still watching Xena Warrior Princess, and are now coming to the end of series three.  It is what it is - lightweight escapist fun.

Sometimes the stories are profoundly cringe inducing, but at the same time the series is strangely addictive.  On a similar note, we both really enjoyed both the recent Dr Who episodes.  The Mummy On The Orient Express played with the murder mystery tropes, and this weeks episode Flatline, which was stonkingly good fun, told a good story with scary monsters.  I like Capaldi's Doctor.

Writing this week has been quite exciting.

I began the week working on my novel The Bureau.

I managed to write 3,732 words, bringing up the running total to 46,803.  I then switched to making notes for a couple of articles for Miniature Wargames & Battlegames.  One about the Blast-Tastic!, a show I went to, and the other describing the scenario I ran at the show.

I then received an editorial report identifying some problems that needed fixing on Bad Dog.  So my week ended up with me adding 907 words during the rewrite.

So this week I wrote a total of 4,639 words, which doesn't sound like a lot until one realizes that I spent eight hours totally restructuring a ninety thousand word novel.  Exciting or what?

Without Scrivener I would have been stuffed. 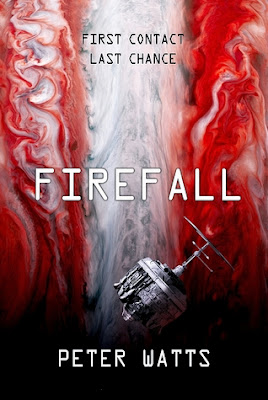 As I mentioned last week I started reading Peter Watts Firefall, the omnibus edition of Blindsight and Echopraxia.  Well I sat and finished read Blindsight last Sunday and what can I say?

If you haven't read it, and you like hard SF novels about first contact scenarios, then I suggest it will be worth your time and effort to do so.

A Google search will bring up a ton of reviews, which I feel the need to comment on.

Blindsight is a novel that discusses complex issues, and therefore if you are not the sort of person that likes to be challenged by rational scientific topic you may find the work not to your taste.  No amount of evidence to the contrary will likely change your mind.

In someways this is the product of our own nature, and how one understands consciousness versus intelligence.

An argument can be made that consciousness deals with aesthetics and emotional responses, whereas intelligence deals with process.  However, the evidence is scarce, hampered by a lack of a general theory of consciousness, with the best research into whether it's nature or nurture that drives human behaviours, only showing correlation rather than causation with either.

As regard the free will debate, I agree in principle that we live in a deterministic universe, but with the caveat that calculating the choice a person, or people in polynomial time within our frame of reference problematical.

As such, while we may not have free will, we live and act in a way that might as well be called free will as described by the two stage model.  I bring this up, because otherwise one would be hard pushed to explain behavioural changes made through cognitive behavioural approaches otherwise.  I apologize for simplifying what is quite a complex argument into one line in the process.

As pitch line: Blindsight by Peter Watts is like Rendezvous With Rama by Arthur C Clarke, but with more despondency and despair at mankind's deficiencies.

And I finished reading Echopraxia today.  It's the sequel to Blindsight, and deals with what was hinted as happening back on Earth at the end of the first book.  Spoiler alert.  It's not going to end well for homo sapiens sapiens.

For that matter it's not going to end well for any of the other cognitive sub-species either; the vampires and bicameral hive minds.

One thing I will say now is that both books require close reading of the text.  Skim read and you'll miss the clues the author plants.

Reading this book reminds me of discussions about reading levels for information pamphlets when I use to work in the NHS.  Our research showed that we needed to lower the reading age of our pamphlets, so as to make our subject as accessible as possible to the widest number of readers.

I'm not going to comment on reading levels, other than to say that people who like to read have higher than average reading comprehension, and leave it at that.

The point I'm making is that Peter Watts makes no concessions to readers, he assumes you will keep up with what he is writing about.  I enjoyed rising to meet the challenge.  Some readers may find it makes the story less accessible.

My pitch line for Echopraxia would be, it's like Childhood's End by Arthur C Clarke, but with even more despondency and despair at the transformation of the world by the Overmind.

One final thought came to mind.  At the end of the story I was really touched by a line of dialogue from Valerie, who is a vampire, who says quote, "Wouldn't it be nice if we could all just get along?"  In the context of what a vampire is, I found this a very moving statement.

One day I hope I will get the chance to meet Peter and talk about consciousness.  Until then I will have to console myself by reading his books.

As for my work this week I see I've managed to write 1,668 words, but this translated into five finished chapters.  So on reflection this has been very much a week of edit what I've written before.  So the evidence suggests that I'm still working my way through the morass of plot and structure hurdles, resulting from the process of converting the first draft of what was a graphic novel, into a first draft of a novel.

In addition I wrote 1,600 words for reviews for Henry at Miniature Wargames & Battlegames  magazine.  So all-in-all not a bad week, even if it's not the most productive week of writing I've had. 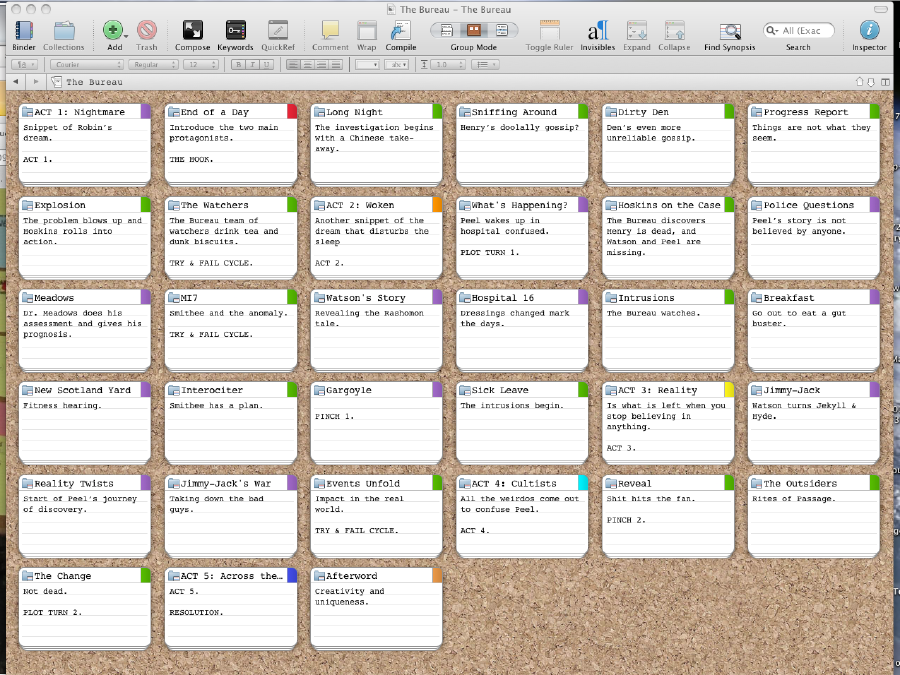 I'm big into plot, story and structure.  The latter is probably related to why I pursued a career as a cognitive behavioural therapist too.  For me, structure is about splitting the story down into acts to create a beginning, middle and end, which are the basic components of every story.  As discussed here.

Above is a picture of what I've been doing this week as I work through the plot, the story and what I need to do to get the whole structure to work.  Mostly this has involved moving scenes around in Scrivener, and making notes about how I'm going to rationalize the Cthulhu mythos in a plausible manner.  I have had some ideas about that.  I'm almost feeling the excitement of wanting to start writing stuff in earnest again, which is a good thing.

I can't recommend Scrivener too highly for this sort of thing.  Without it I would be forced to use post it notes or a cork-board.
Posted by  Ashley at 17:58 No comments: