So as we come to the end of January I'm still writing. Very slowly by my standards or expectations, but I am writing again. I even had an idea for a short story, which is unusual for me as I don't really do short stories.

Last week I beat my target and more importantly, I managed to get my current novel to a point where it looks like I can finish this week. We shall see.

I spent last week reading Neil Gaiman's and Terry Pratchett's Good Omens, which lightened my mood, and this weekend I re-read Wolf in Shadow by John Lambshead, which remains a delight with its witty observations of wargamers in watching an intrusion from the otherworld at the ExCel centre. It made me laugh.
Posted by  Ashley at 14:39 No comments:


Last week was a bit mixed. Tuesday I went out with my beloved to pass through Parliament Square on the day of the Brexit vote, and then to take in an exhibition at the British Museum about Ashurbanipal the last king of Assyria, which meant when we got home I was too tired to write.

Wednesday I struggled to wrest 200 words, but did so late in the day. I realised I'd allowed myself to get distracted. The lure of editing distracting me from my need to write new words.

Thursday, half the day was spent at the hospital with two appointments. Everything checked out OK, which is good, but the loss of time and feeling drained from it all was bad. So last week I managed to write 1,473 words, meeting my basic target, but not really getting into a good writing streak.

I came across Patricia C. Wrede's blog, which helped me to put some difficulties into perspective. If you're into writing then I recommend checking it out. Link here.

Next week I shall try and put some of her ideas in practice to get my writing streak going.
Posted by  Ashley at 14:02 No comments:


This entry is for me. A record to remind myself that things are getting better.

Last week I started writing everyday. My target set at 200 hundred words. Set low because I still can't face the prospect of writing more without fearing I've lost what it takes to write. Even though rationally I know one just sits down at the keyboard and type.

In an ideal world, the words will flow. They don't have to flow fast, but practice and they will come. One after another.

It's almost like magic, but really it's just about letting go and being creative. Making stuff up as you go along. Like we did when we were children, telling ourselves stories as we played. if you can do that then the words come out.

So last week I started. I managed to write new words for my stories. I recorded a total of 2,436 words. I also wrote some non-fiction words, which I haven't counted up yet. So I'm pleased.

I started the year with 31 books in my to be read pile, but got distracted when I went back and re-read some old favourites to cheer myself up.


The Compleat Bolo by Keith Laumer.

Which I read when I started writing my cybertank stories, because it's always good to go back and look at the source material before doing one's own homage.


Over the course of the year I read a bunch of books. All mentioned in passing here.

When I was acclimating to the medication I found myself reading more and and what I said can be read here.

Then as the year came to a close I reviewed my friend Alex's book and some others I had read too, here.

I make that a total of 34 books read this year if one counts both the Hogan compilations as being two books each. Looking at my to be read pile I have 22 books left. I better go out and buy a few more books.

I also read the following non-fiction books, but I only reviewed one, which is linked below.

So, just put this up as a place holder, to remind myself what I've read and enjoyed over the last year.
Posted by  Ashley at 13:14 No comments: 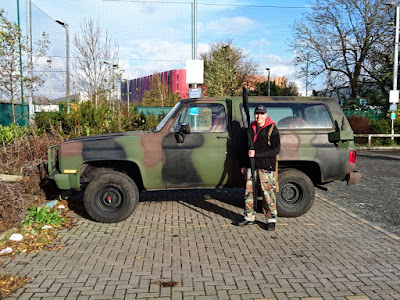 Wow, what a year. My life has been a bit rough, what with one thing and another. It has been one of those years that when you look back you can see loads of good intentions that were not met. I've been keeping up with archery as it's an enjoyable way to exercise, but as I said when reflecting on my writing, I haven't been writing enough.

So I made a decision.

Since it has been six months since I lost my writing mojo, I've decide to set an easily reached goal and I plan to write 200 hundred words per day. This is to set myself up for success with baby steps, but I will review my goal again in three months to check whether I've set the bar too low.

I hope that by doing so I can finish writing The Bureau, my Cthulhu mythos story, and make inroads on my next SF novel, Two Moons. And if luck should favour me, and I find I get my writing streak back, then another couple of episodes in The World of Drei series too.
Posted by  Ashley at 17:52 4 comments: 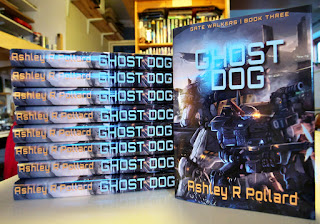 I went out last night to celebrate the new year with my friends Pum & Jay, and got to see some other long time friends of mine: Glenn, Robin, Ian & Jane. As a result we didn't get home until the early hours of the morning, and as a result I've been struggling today from not having slept at all well, which is why this post is going up so late in the day.

Looking back on the year let's see how I did. Words wise, I failed to meet my goal of writing three new novels.

I only managed 77,079 words of new fiction, which is pretty miserable, and a reflection on how miserable I've been feeling. I also wrote 18,799 words for this blog, and 8,287 words for my wargaming blog. In addition, I wrote eight articles for Galactic Journey, which came to 8,650 words.

That comes to a grand total of 112,815 words. The majority of which I did in the first six-months of last year.

This has largely been down to how ill I've been since July. However, I do note that saying this I have managed to write more than the 57,407 words than I wrote in 2017, which I'm going to take as another win, even though back then I had the excuse of having a day job.

However, while I may have spectacularly failed to meet my writing goals I did get my three novels out the door. So I'm counting that as a win. Also, I wrote three novelettes, which are also out of the door. Another win.

So my plan is simple, take the time to get better and then start writing new words.

To finish, as dinner is about to served, I wish all my readers a happy new year.
Posted by  Ashley at 19:51 No comments: