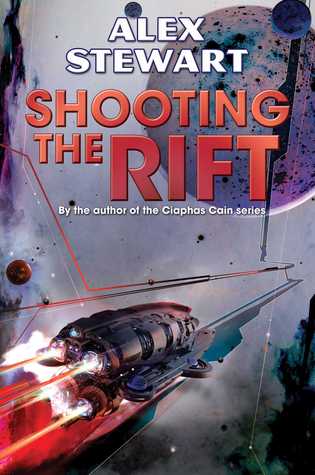 A disclaimer, just in case you don't know, but Alex Stewart is a long-time friend of mine and therefore I'm probably biased in my review.  So I'll get that out of the way right now: go buy this book.

I really liked Shooting the Rift.  The story felt very comfortable to me.  It had the feel of putting on a pair of slippers and dressing gown and curling up in comfort.  At times the book read like yesterday's future of tomorrow, but Alex managed to remind me that the future will be unevenly distributed and the mix of tech levels as his protagonist travels from one world to another.  Shooting the Rift features a fascinating melange of cyberpunk in a trans-human future where mankind has spread out across the stars; so while this is not full-fat, high caffeine, raw meat science fiction, it is in the tradition of grand sweeping space opera.

I'm so glad that I really enjoyed reading this, because so often when I read friends books they're OK but, they don't grab me and make me want to read the sequels.  The denouement of Shooting the Rift leaves everything with the promise for more.

Quite frankly I want more and it can't come soon enough.
Posted by  Ashley at 17:43 No comments:

Let me expand what I mean when I say I'm a Bad Fan.  I tend to do my own thing when it comes to buying CDs of bands I follow or the books of authors I read.  I find I'm always behind on the latest new thing because I'm still enjoying the last old thing I found.

For example, take the band Garbage.  I discovered them when Buffy the Vampire Slayer was first on TV after buying the soundtrack for the series that had all the songs from the band that appeared in the show when the characters were hanging out in the Bronze.  That was back in 1999 and I probably bought my first Garbage album in 2001/2.  As I said I'm not quick when it comes to getting on the band wagon.  So this old fogey has been following Garbage for about 14 years, and the band has been around 20 years.  That pretty much defines not being on the bleeding edge.

I only recently got their last new album Not your Kind of People, which is great, mostly because I'd forgotten about it and there is another new album coming out soon: Strange little Birds.  And don't get me started on Blackstar by David Bowie, who along with Kate Bush I use to buy every LP (vinyl record for those who are too young to know what an LP is anymore) as it came out during the seventies and early eighties, but there again I reiterate I'm a Bad Fan, because I buy/listen/read/consume things at a pace that suits me.

Anyway, on the internet in the last week we've had the usual foolishness of of people telling me what kind of SF there is and who likes what.  Warning this link takes you to Damien Walter being judgemental and dividing the goats from the sheep in his Eight Tribes piece.  I will state here that I intensely dislike being herded into a tribe.  It's divisive and serves no useful purpose.  Furthermore, my experience is that while some fans self identify as a fan of a particular part of the genre, lots of us (me) like to taste more than one thing.  To then extrapolate that certain parts of fandom – those into Military Science Fiction – are part of a right wing tribe that is just a poor ad hominem attack on those that Damien Walter's doesn't understand or like.

All this sort of piece does is divide people, and I'm not happy with being defined by a genre I read.  My reply to anyone who thinks that this is reasonable is sod off.

On a related note Paul McAuley wrote a rather nice piece on the Clarke Award in response to Nina Allan's Last Hurrah blog.  To quote Paul:


Science fiction, perhaps the most protean of genre fictions, is somewhat harder to define. We know it when we see it, but it includes a vast variety of different kinds of fiction; its borders are vague; it overlaps other genres, including literary fiction. But in all of those different kinds of science-fiction works, there's perhaps one unifying factor: rather than exploring reality, science fiction is interested in exploring the limits of reality. Rather than analysing and universalising individual human experience, it's interested in analysing the reality of the universe and measuring it against human values. It's about change and difference, and the consequences of change and difference.

I particularly like the, exploring the limits of reality, which is apposite given what science has to say about local versus non-local reality or if you prefer our biological versus our mathematical understanding of the universe we live in.

So that's it for another week, and I have to find my centre and get on with finishing off an article I'm in the middle of, rather than fretting over stuff on the internet that upsets me.
Posted by  Ashley at 17:18 2 comments: 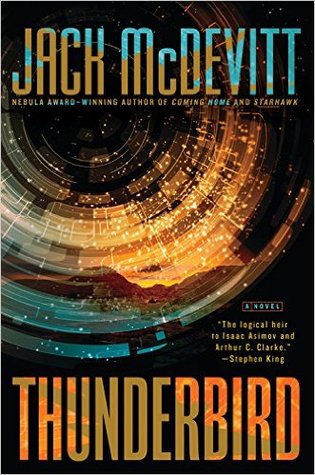 Running late again due to the knock-on effects of the time it took me to sort out my computer.

I think it's clear from previous posts that I'm a fan of Jack McDevitt; in particular the Alex Benedict and Priscilla Hutchins' series.  Though I was rather disappointed with the last Hutchins book Starhawk, which I thought added little to the series story arc or character development.  Thunderbird is a sequel to his 1996 novel Ancient Shores, which was a novel I really enjoyed.

However, while the writing is good, the plot of Thunderbird was rather disappointing.  Not in the same way as Starhawk, which added nothing to the series, but because of the direction McDevitt decided to go with the idea of a stargate that can take one to other worlds.  For me, while the characters made perfectly acceptable decisions, they were the wrong characters to be telling a story of exploring strange new worlds, seeking new life and alien civilizations, and boldly going where no one has gone before.

It's unlikely there will be a sequel to Thunderbird, which is another reason why it felt disappointing.  There again, I never expected a sequel to Ancient Shores, as the novel is self-contained, and ends with the puzzle solved and hope for a new journey.  I'm reminded of the adage that a sequel written many years after the original is generally not improved by the passage of time, because the author will have grown and changed.

Other than that my spare time has been taken up with dealing with computer issues, archery practice and my job, which has meant a failure on my part to progress the draft of my third novel.  This is quite troubling to me as it indicates a failure to adapt, as the Marines would say, but it reflects the demands of my job and why I hadn't been writing while working full-time.

At some point I will have to make a decision on what I'm going to do if I sell my first novel.  Until then I have the luxury of waiting and seeing what happens.

NB: Please excuse my overly critical voice of a writer whose work I greatly admire.
Posted by  Ashley at 18:01 No comments: 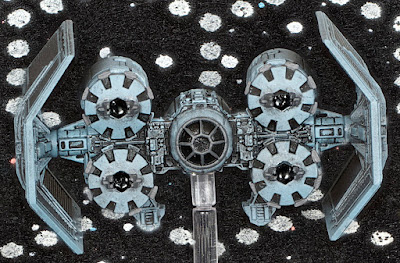 I have been a bit distracted by a combination of work and life.  Last weekend was full on archery with Saturday mornings practice being followed a whole day of shooting on Monday, which can be read on my other blog when I post it up.

I was also very busy time at my job, which left me feeling drained.  So, after work on Wednesday, I walked over to Orcs Nest and bought the latest copy of Miniature Wargames & Battlegames magazine, and at the same time bought a Star Wars X-Wing Punisher miniature (Imperial super bomber), which was appropriate as it was May the Fourth.

I don't really do the Star Wars Day thing, mostly because I forget and in this case far too focused on work.

When I got home I read on Twitter that Gene Wolfe had equated the term Sci-Fi as equivalent to a racial slur beginning with the letter N.  I'm boggled by this, and you really couldn't make this shit up and have anyone believe you if you wrote it.  I'm not as old as Gene Wolfe, but I'm old enough to be older than a large portion of SF fandom and I can't see the point of getting wound up by the term Sci-Fi, which was coined by Forrest J Ackerman in 1954, which was before I was born, so it's been around a long, long time.

Some people get sniffy about using Sci-Fi and some even prefer to use the term Speculative Fiction over Science Fiction, but at the end of the day it's down to personal choice, and I don't think that anyone has a leg to stand on if they compare the term Sci-Fi with a racial slur; at best it's over egging the argument, at worst it's downright offensive.

Thursday was shopping and today I just took it easy and opened my new Star Wars miniature and re-organized how I numbered both my Imperial and Rebel Forces.  These things are important you know!  Anyway, it was fun unpacking all the bits & pieces, fitting the flight dial together and sorting out all the tokens and packing them away in order for when I next get to play.

So another week with no writing done – well apart from doing blog entries and compiling stuff for another article for Galactic Journey's blog.
Posted by  Ashley at 17:06 No comments: