I've been away for the weekend, down in Brighton seeing my godson, whose mother is the Comms Officer for Brighton town council, and who was involved in running the Gay Marriage press coverage.  All her hard work meant the press roadshow ran smoothly.  Me, I got to play with my Godson and his sister all weekend.

On the writing front; The first of the writers group feedback critiques are starting to come in.  I've only looked at one so far, and will need time to process what has been said.

As for writing this week I managed to produce 5,194 words.  Other than that I have little to say really, apart from having had a lovely weekend in Brighton.
Posted by  Ashley at 20:35 No comments:

Well what a week it has been for me, and all good.  First I've come out of the other end of a very bad chest cough, and I no longer feel like dying.  I also had a review by my GP, and my latest blood test shows that my inflammatory markers are stable, which means that my rheumatoid arthritis is stable; after six months of being off the methotrexate, which caused a decrease of my kidney function during my four years of treatment, this news is to put it mildly, a bit of a relief.  While my kidney function has stabilised, it will need to be monitored every six months for the foreseeable future.

Still mustn't grumble, things could after all be worse.

As I discussed last week, I started restructuring my novel based on two of my Beta readers feedback.  This week I got back the feedback from my third Beta Reader that really kicked the ball out of the field.  Using this, and the first two readers notes I was able to correct my second draft of the novel.  This has been an illuminating experience, which has highlighted my fundamental weaknesses as a writer; a poor educational record, and a bad upbringing.

Therefore I've been addressing the deficits in my writing craft, and have had a couple of minor Oh Doh moments along the way.  Hopefully, I will be able to translate these moments into meaningful skill improvements, and thereby bootstrap the quality of my writing.  We shall see, and I'm now really looking forward to the workshop critique that I have booked for next month.  Reflecting on how word count is not always a metric for measuring progress, this week I managed to write 2,617, ending up with a draft that was only 1,427 words longer than the one I started with; and trust me when I say I had negative running totals on some days that I wrote.

The biggest achievement was getting the 16,441 words of act 1 finished, which was a bit of a nightmare; I began with about sixteen thousand words, intending to edit down to fifteen thousand, but ended up with nearly nineteen thousand words by Friday night.  Saturday morning I woke up at six with an idea on how to edit Act 1.  I then went back to sleep, but had to get up at seven thirty, and I wrote throughout out the day, finishing around seven in the evening.  In addition, I managed to knock the remaining acts into submission too.  So a good days writing, and I feel quite euphoric, which is not a feeling I've had much acquaintance with over the last few weeks.  It feels good to be feeling good again, after feeling down in the dumps for so long.

So no chats about what I've been watching now, but I'll probably do a couple of extra posts later, over the course of the week, if I have time.  Thank you all for reading this, and take good care of yourselves, because if you don't have your health then you don't have anything.
Posted by  Ashley at 13:51 No comments:

Well Saturday I was off to to meet and listen to Meg Davis talking about being an agent, like in the Matrix; sort of one of these novels has a future, the other does not kind of thing.  She was very entertaining, witty and handled the questions put to her with aplomb.  She certainly gave me a lot to think about, and I liked the approach she has to being an agent representing writers in the ever changing world of publishing.

This has also been another week with further storms on the internet as otherwise nice and reasonable people decide that fisking (a new word to me, which describes a person blogging about another person's blog in great detail demolishing arguments point-by-point) is in someway useful in developing a dialogue that promotes joint understanding.

Colour me unimpressed with the way social media is leading to twitter-storms of hate.

I am reminded that we all think that our opinions are chosen based on evidence; whereas the research shows that we find our opinions as we go along, and then look for evidence that supports our choice, and discounting any evidence that contradicts it.  This largely means that rather than being open to other peoples opinions, and generating consensus, or agreeing to disagree we see strife and division among those that have more in common than they acknowledge.

This last week has seen me working on my first novel as I go through and address some of the story pacing problems my beta readers highlighted, which I did by reordering the scenes to make for a stronger first act.

The computer said I did 1,392 words, but my manual tracking suggests that only 399 of these were actually new words.  The rest of this weeks writing has been me working on other things, with 785 words for a review for a magazine completed, and 1,392 words review for someone else.  So after being ill for three weeks it feels like I've at least put my feet back in the water and started paddling again with a total of 3,407 done.

As some of you may know I am an avid model maker and wargamer  and you can catch up with my hobby stuff here, which will take you to the latest blog entry.

I read Tom Kratman's Caliphate last week, which can best be described as a near future dystopia.  He is an interesting writer, if only because he deliberately goes out of his way to bait readers with his views that are quite right wing.  Not to everybody's taste, but I think one should always be open to reading books that one finds challenging, and he certainly does that in spades.

TV wise this week was spent finishing off watching Ghost in the Shell: Stand Alone Complex 2nd Gig.  This is one of my favourite Japanese anime shows, and while it can be a bit opaque at times for Western viewers, the themes and underlying plot that the stories in each episode illustrate are very thought provoking, while remaining entertaining too. 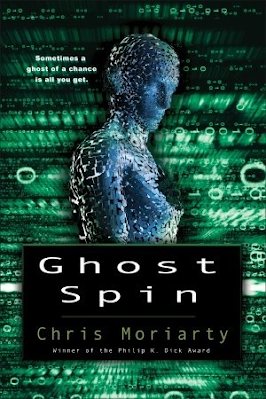 Well I've been rather unwell for the last two weeks, after the cough that started at PicoCon fully engaged me, and made me feel like death; as in death would be a blessed relief from trying to eject my lungs from my body.

By Tuesday of last week my rib cage was protesting about being in the ring with Mike Tyson, and while I am now much better, for definitions of better that I no longer think I'm going to die, it's not what I can call a productive couple of weeks.

So no work done on my fourth novel, but I did manage to write 1,600 words to finish a review for a magazine.

So I don't feel like the last two weeks has been a complete waste, but I do feel like I'm going up the wall from the frustration of being so ill.  My partner has been most supportive.  Last Sunday week I spent listening to podcasts, and falling asleep while enjoying them, which may sound perverse, but really wasn't, as I was feeling so ill.

Anyway, I finished reading Chris Moriarty's Ghost Spin, which ended in much the same way as the TV show Quantum Leap did, with our heroine and AI companion jumping off into the Cosmos to do whatever had to be done, and be part of the whole of existence.

The novel in turn enthralled me, fascinated me, and confused me.  Not sure I'm clever enough to understand all the things that Chris was discussing.  Still, a good read, even if I felt the ending didn't quite deliver on the promise of the story.

Moving on, we have now finished re-watching Game of Thrones season one and two, and have now worked our way through season three, which is stonkingly good, but I have some reservations about the world of Westeros, and the story in general.

First off Westeros seems to be stagnant, as in nothing is progressing; It seems that all the inhabitants can look forward to is another thousand years of slavery, bad dentistry, and a lack of soft toilet paper.

In some ways I find the world of Westeros less convincing than that of Marvel's Asgard in that regard, and to be honest the Thor movies are not really about convincing world building, though I did enjoy watching Thor: The Dark World this week, we missed it while it was at the cinemas, so, but as we have a big screen and an excellent surround sound system we still got to see it as intended.

Just to say that I'll continue watching the GoT TV series, but I am not going to read the second volume of the series.  Too depressing for one thing, and too long for another.