I have as the groovy kids like to say, been chillaxing: for definition of taking some time out from working on Strike Dog that mean I've been writing for the Galactic Journey, a review of Eric Frank Russell's The Great Explosion, researching what I'm going to write about for the next article, taking pictures of my wargame models for Miniature Wargaming magazine.  Quite frankly I needed to take a break because all this is on top of my work in the NHS, which was a little bit stressful leading up to Xmas.

So, I've been taking some time out to do some me things.  This mostly means sitting at my workbench assembling wargame models.  Some authors draw or paint pictures of the stuff in their imaginations, write songs or poetry, invent new languages.  Me, I make miniature soldiers of my imagined future.  It's the way I roll, but more importantly it makes me happy.

The picture is a reminder that one day I want to write a near future, for definitions of near that might mean up to five hundred years ahead, story set in our Solar system with colonies on other worlds.  It might feature war.  Who am I kidding, it will be a war story set either around Saturn or Jupiter: there advantages and disadvantages to both. 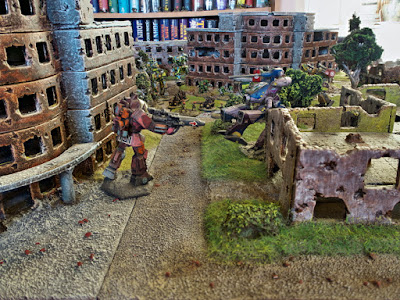 I have been working across the holiday season on several things other than finishing my novel.  Hence the title distractions.

The first two distractions were writing short reviews of books sent to me for review, which of course I had to read.  This time Osprey sent me two books that I could comment on, if not with considerable authority, with enough authority that I felt I could write a brief review for each that would be informative.  Those have now been sent off to John Treadway the editor  of Miniature Wargames.

Wargaming with toy soldiers is a lifetime hobby of mine and over the years I've amassed miniatures and terrain.  My only regret is that I don't get to play as much as I would like, and also not finishing projects in a timely manner.  My excuse is that it's my hobby, not my job.

Anyway, John from Miniature Wargames had also asked me if I could supply some pictures for the next issue of the magazine, because he had an article on BattleTech about the new Alpha Strike rules.  He asked for ten shots, I sent 17, and I believe four made it into issue #406.  Yesterday I saw one of the pictures which is being used for the Dark Horizons insert–a magazine supplement within the main magazine.  At the top is my original picture, and below is the crop they used. 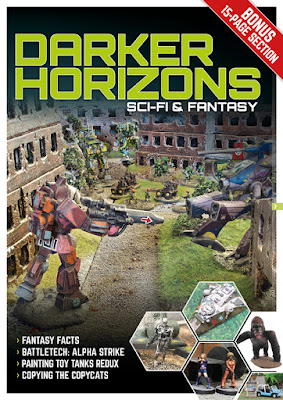 I'm feeling pretty chuffed by this.  At some point, relatively soon, I will be running a photo essay on my other blog to show off the pictures that weren't used.  After all, a lot of work went into making the terrain boards, assembling the models and painting them, and the considerable amount of time it took to take all the pictures.

Speaking of photography, I'm now working on an article–a rewrite of something I sent Henry the previous editor of Miniature Wargames–about how I take the pictures I took: namely getting everything in focus from back-to-front when shooting pictures of very tiny models.

But before that I have my regular monthly article for Galactic Journey to write, and this month I'm reviewing another Golden Age author whose works I read voraciously when I first started reading science fiction.  So, busy with many distractions taking my time up, preventing me from getting on with my novel.

But writing is writing, and I'm enjoying doing what I'm doing, and things fall where they fall.  Makes me grateful for having the day job because I don't have to worry about where the money is coming from.  Until next week, have a nice one.
Posted by  Ashley at 13:19 No comments:

Email ThisBlogThis!Share to TwitterShare to FacebookShare to Pinterest
Labels: Photography


Combat androids are only briefly mentioned in Bad Dog, but they're central to the back ground setting of my universe, and in the sequel Strike Dog one will get to see them in action for the first time.  My combat androids are based off the Boston Dynamics company Protection Ensemble Test Mannequin–PetMan–a project designed to fulfill a Defense Advanced Research Projects Agency (DARPA) brief.

However, in won't be until final book Ghost Dog that you will get to see combat androids deployed in anger against an enemy.

The Bad Dog universe military designation is HOS, which stands for Human Operator Surrogate, and they're semi-autonomous robots with a hybrid expert system artificial intelligence operating system.  Think of them as walking drones that require a human to controller to OK the firing of weapons.

This allows the operator to effectively operate twelve PetMen, with the network allowing them to multi-task, and therefore one soldier can act as a squad.  The PetMen acting as both a force multiplier, and reducing the number of soldiers exposed to enemy fire.  In my imagination Global Dynamics Corporation Defense Industries sales pitch would call them An Army of One.
Posted by  Ashley at 13:25 No comments:


Time for me to look back and sum up my thoughts after four years of writing.

Work wise, it has been a complex year for me, what with starting the day job.  Two days a week, may not sound like much, but I run a clinic at a major London NHS Trust, and the work demands a lot of me.  Regardless, it's something I thought I'd never do again after my illness, and at the end of January I will have been working for a year.  And there's archery... a sport, come hobby, come martial art I've taken up, with the aim being to get me out of the flat and doing more exercise, which is good but takes time.  However, all good, all things considered.

Other things that have consumed time this year, besides getting a new camera–that took several weeks to get used to using–was having to change my internet service provider and buying a new computer.  Both of these took up more valuable spare time that I could have been using for writing.  So much for my excuses.

Less good was having my first novel turned down, and now I have to decide what to do next?

Realistically, given I don't have an agent, sending it out around the publishing houses is a waste of time, and given that good agents are as rare as rocking horse pooh I think I shall avoid going down that path.  I have a plan, but you'll need to be a little bit patient with me as I put things into place before announcing what I intend to do next.  I need to get several other things in place.

One of those things is my second novel, which is stuck in the editing and polishing stage, with minor re-writes of stuff and additional scenes being worked on.  That may actually add a lot of words to the novel, as in twenty thousand or so, depending on what I decide to do.  At this moment  Strike Dog is currently running at 101,724 words, so we shall see how this goes, but whatever happens it means it's going to take me longer to finish than I expected it to.

My third novel Ghost Dog, running at 97,475 words, is also still being worked on after my Alpha reader pointed out I had planted a sub-plot at the beginning of the story and singularly failed to capitalize upon it.  Doh!  Tracking my words written this year is therefore a bit difficult, but I guess it ranges from 199,000 to 398,000 words edited, given I've done two drafts of each novel.

This is way down on last years totals, but there again I had the day job, which only goes to show how much time that actually takes.  Still, it sounds like excuses to me and I'm not one who likes excuses.

Reading wise, the number of books read this year felt low, but after compiling my list I see I managed to read 21 novels, which is only five less than last year.  I've also read five non-fiction books, which when again rather surprised me as I hadn't thought I'd read that much either.  So I seem, despite what I felt, to have made good on intentions and managed to almost equal last years total of books read with less spare time.

This only goes to show that feelings are not facts.  Useful to hold onto when things feel like they're getting on top of one.

NB: Told by my beloved that I should show the groups I was getting.