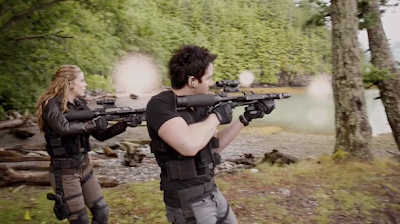 I should be writing as I type this, and by that I mean working on my novel Strike Dog, but I've just had this bug in me that wants to worm its way out of my body.  Hence the diversion from working on the novel to take the time to write this here and now.

Anyway, why watch one episode and wait a week when one can watch two, three or four episodes at a time?

We have just finished watching the new series of Primeval New World.  I was totally bummed on discovering that it has been cancelled, which just sucks in my opinion.  I think I can see why though.  It was too slow in developing the central premise and showing the consequences of the wham, bam thank you ma'am action.

I know ickle-poo dinosaurs are cute, but good stories have consequences.

The original Primeval show was at its best when it showed the consequences of the teams actions, and why the choices that the characters made mattered.  Primeval New World really hit a chord with us after we saw the death of one of the major characters girlfriend, but for me the following two episodes wandered away from the plot.  Don't get me wrong, dinosaurs are cool, but even the coolest of things can fail to attract an audiences attention if you don't have enough plot.  The plot for Primeval has always been that time travel risks changing the world.

I remember watching the end of the first season of Primeval on British TV and being shown what happens when the characters changed the timeline.  The story really upped the ante that made the series take off for me, but it didn't take the original production company thirteen episodes to do this.  Therefore my feeling is that Primeval New World failed to grab its audience, because the new producers took too long to show us the story that they meant to tell.  It's a shame as I was starting to like the characters too.

NB:  As an addendum, the one thing I hated about the show was the portrayal of Lieutenant Leeds.  Not his acting, dialogue, or character.  All fine, but the fact that he was shown wearing his uniform jacket unbuttoned, which would have been anathema to any serving member of the armed forces.  Sorry, but every time I saw him it kicked me out of the story.  Call me pedantic if you want, but details like this matter.
Posted by  Ashley at 18:38 1 comment:

This has been a difficult week for me.  Some of the reasons are from four poor nights sleep due to the pain I get from having rheumatoid arthritis.  The other problem was getting stuck on one of the chapters I was writing.

So I spent one whole day researching what I needed to know to be able to write said chapter, and the other day was spent outlining the novel and ending up with twenty-five chapters.  Each chapter has a title, notes with a least one scene in each, and some with more than one major scene.

I had been putting off the outlining, because I had doubts the story I was telling, but the doubts were ultimately addressed after I sat and spent all day outlining.  Ironic, or what?  For me it felt like I needed to get words down before I could outline, because during my first novel that was what happened then.  The difference was that this time I needed to get less words out before I needed to do the outline.

So I'm now five chapters in for a total of 17,062 words.  This week I wrote 4499 words and my first three weeks running total stands at 17,124.  Compared to when I was writing Bad Dog I was at 13,303 words at the same point in time, so I'm ahead by 3759 words.  Looking at my diary I see that the following week was when my word count took off on Bad Dog, so it will be interesting to see if the same occurs with the sequel.
Posted by  Ashley at 20:16 No comments:

Been a busy week for other stuff.  In this case going to the RAF museum at Hendon on Thursday, and Salute at the ExCeL Centre on Saturday, which has impacted on my writing this week.  Not just because of the time taken out from writing, but rather by how exhausted I felt after the long day walking around on Thursday.

Still mustn't grumble, could be worse.

So progress this week on Strike Dog was 6209 words for the week and a running total of 13,621.  Still way ahead of the situation I was in during the first draft of Bad Dog where after two weeks I had only written 7316 words in total.  I find it useful now to compare my progress, because I find my moods have been a bit down about my work.  This was especially bad on Friday when I was in so much pain from all the walking I did the day before.

However, on Saturday when I was at Salute, the South London Warlords annual wargames show, a couple of friends of mine were also complaining of being in pain.  Having them tell me this actually helped me to put things into perspective about my own pain.  Sometimes it is just so damn difficult to keep an objective perspective on something that is so subjective.

Anyway, pain is natures way of telling you that you are still alive.  The alternative, is as the say, worse.
Posted by  Ashley at 17:15 No comments:

Well I had two weeks off from writing to share holiday time with my partner, which was good even though the weather was freezing cold.  So in between going out and doing stuff together, meals and movies, I read a lot of new books too.

So the plan mostly survived contact with reality.  I did work through Bad Dog for typos and double words.  I did work on a plot outline for the sequel.  I've started the articles for Henry at Miniature Wargames magazine, and as I said I read some books including stuff on the USMC officer training.  I even did a couple of blogs.

However, my intention re-write my first novel has stalled again, even though I spent some time eviscerating the outline and restructuring the plot and working out what needed to be done, I found myself writing Strike Dog instead.

Strike Dog is the working title for the sequel to Bad Dog.  Clearly I'm in the groove, or caught in a rut depending on one's perspective, and I find myself driven to write about the world of Bad Dog.  So this week I only managed to write for four days due to going off to Bisley for research, so the total numbers of words was 7418, which is not quite two thousand a day.

What was interesting was the emotional wave I rode this week getting back into the saddle, which triggered the usual negativity writers seem to suffer from when writing.  However, what was interesting was using my diary to compare and contrast the first weeks total when I started Bad Dog, which was a mere 2734 words to this weeks total of 7418.  Lesson here is don't allow negativity to put you off writing.

So rule number two is keep a diary of the number of words that you write each day.

Rule number one remains write every working day.
Posted by  Ashley at 17:30 No comments:

As part of my research for writing a military SF novel my partner booked a training day at Bisley Camp.  The weather was cold, which meant dressing warmly, but fortunately the rain in the morning had stopped by the time we got on the ranges.

Note the ear defenders.  When writing scenes in stories where people are firing guns remember that they are loud.  The bigger the gun the louder it will be.  Silencers, are sound suppressors and don't actually do what Hollywood shows them doing.  Any scene in a room where someone fires a gun will result in a room of temporarily deafened people unable to hold forth with verbal exchanges of wit and repartee etc.  Show the readers that you have done your research and keep it real.

I didn't get to keep my results from the outdoor ranges, something to do with them being part of a big frame mounted system one hundred yards down range from where I was shooting from and all.  However, the gallery rifle shooting had these standard targets one could take home with one.

if you want to read more gun geek stuff about the day and what I learnt then go here.
Posted by  Ashley at 12:35 No comments: 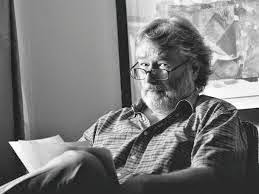 Just announced here.  Expect link to be down for the near future.  Iain has been diagnosed with late stage gall bladder cancer, which means less time to live than he would like, or expect to have.  I'm feeling quite emotional about this as I write.

I can't say that I knew Iain well, drank at the bar with him at several British SF Eastercons, saw him on panels and giving talks and the like.  I really enjoy his Culture novels and what more is there to say?

BBC news here.  An interview here.
Posted by  Ashley at 12:57 No comments: