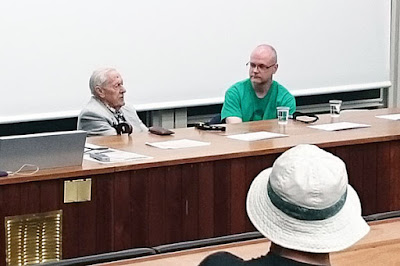 Last Saturday my partner suggest that we attended Mini-Convention, which was a one day event run by The British Science Fiction Association, the Science Fiction Foundation, and the Imperial College Science Fiction Society.  The attraction for Susan being the chance to hear Brian Aldiss speak.  We'd seen him at LonCon 3 the world SF convention, but missed any of the panels he was on, and given that he's not getting any younger (none of us are) it seemed like an opportunity we should take.

He gave a set of rather charming answers to his interviewer's interesting questions.  A genuine grand old man of SF.  One thing I learned and liked was the fact that he keeps journals that he draws in.  He has a shed load of them it seems, and we got to see some of his collages later on.  It made me feel good about my own book of doodles, and my other blogging where I show off the models I make of things I'm thinking about.  In particular my recent attempts to make models of the combat armour suits that appear in my first three novels.

We also got to hear Pat Cadigan talk, and as a result of listening to her we're buying a collection with her short stories in, which only goes to to show that authors talking about their work gets people interested in reading their works.  Besides seeing the two authors talk there were other discussions too, and while Mini-Convention was very low key (they asked people not to mention it on social media during the day) it was an enjoyable day out that mostly avoided the Hugo controversy, which quite frankly I've had enough of.

We also got and have finished watching season one of 12 Monkeys, and I'm impressed.  It's a very clever, retelling of the Terry Gilliam movie, because while the story still has all those elements of the original the style no longer treats them as a nightmare that comes over as totally bat shit crazy insane.  Also, Barbara Sukowa is stunningly good as the slightly obsessed to the point of being crazy doctor, especially so when playing the younger version of herself.  I can recommend the series if you've not yet seen it.

Also this week we finally caught up with Man of Steel and Kingsman: The Secret Service.

Starting with Superman first; the Man of Steel manages to reinvigorate the franchise, assuming that one doesn't mind the violence, which is the antithesis of the much loved versions starring Christopher Reeve.  I would say that the fight scenes in Metropolis were on reflection a tad over long, but the whole ruins things worked for me, because it very much reminded me of the Alan Moore Miracleman fight – two god like beings slugging it out while mere mortals try not to be noticed.

However, it was Kingsman: The Secret Service that really impressed me.  More violence than you could shake a big stick at, but it had a sensibility that just lifted it up beyond it's source material: James Bond, which is referenced within Kingsman.  There are a couple of scenes between Colin Firth and Samuel L. Jackson that set up and deliver a punchline that was quite frankly breathtaking.  I've just read that the director is working on a sequel, which is most unlike him, but he says if he can write a good script it will go ahead.

With regards to my writing this week I've been distracted, dismayed and distressed by a number of events throughout the week, which due to a wide range of other factors have rather derailed my progress.  Still, I managed to finish another chapter, but I feel I really must do better.  Words written 851, edited 1,760, running total 100,349.

Bright hope in darkness.  Managed to deconstruct my seven book series arc, and plan out everything I want to do.  I can add side stories and diversions to the series core, but I now have a much better handle on the themes, and overall structure of the series arc from the beginning, through to the middle and how it ends (five pages of penciled notes in the notebook I keep).  So that's it for another week, see you all on the bounce.
Posted by  Ashley at 11:19