The other week I spent one of my writing days blogging, taking pictures and letting thoughts noodle around in my head.

I also sorted through my projects, I have several folders full, and did what was effectively a spring clean.

Decided to open a new Scrivener file for a novel set around Saturn. Working title: The Conflict, and then I realized that's a tad meta.  Noodling ideas for a proper title, and brainstorming plot ideas, which looks a lot like staring into space.  I have an idea for the opening scene set around Saturn, but the middle and end of the story or to be technical what's it all about still eludes me.

Or, as I write this I realize what I have may actually be the end of the story, leading to the final confrontation and conclusion.  Such is the way of ideas, they happen.

In amongst all this noodling I ended up writing an extra 517 words, got to catch them all, on my finished fifth draft of Strike Dog, which was telling me it wasn't quite as finished as I thought it was.  Running total for the finished draft is 103,660 words, which has now gone back to my Alpha reader for her to peruse.

Now I'm starting on the next draft of Ghost Dog, where I already know I have to write ten new scenes–two lots of story arcs, one to add back a missing plot element, the other to give a bigger picture of what's happening for the reader.
Posted by  Ashley at 09:18 No comments:

This is the third year in a row that I've attended the conference, come workshop, come convention that is Imperial College London's Science in Science Fiction.  It is run by the energetic Dr. David Clements, who can call on world class experts to present on a diverse range of topics of interest to any science geek who wants to write stories with up to the minute science in them.

Wednesday afternoon we all met up for the first talk, which was about the Square Kilometre Array and the Epoch of Reionization by Emma Chapman.  A fascinating look at how science is pushing our knowledge of the beginnings of the universe further back in time through advances in technology, and how we are getting to the stage where the amount of information that can be amassed will exceed our ability to record it. 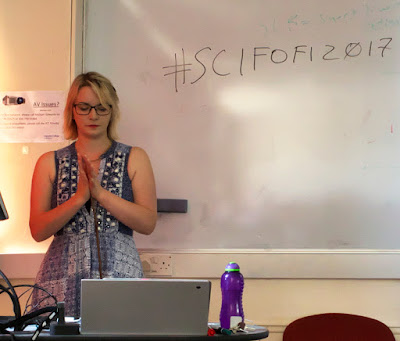 Next up was a talk on Titan and Cassini by Ingo Mueller-Wodarg that explained the importance of what has been found, and what the mission hopes to get from the final end run that bring the mission to a close with the spacecrafts destruction in Saturn's atmosphere. 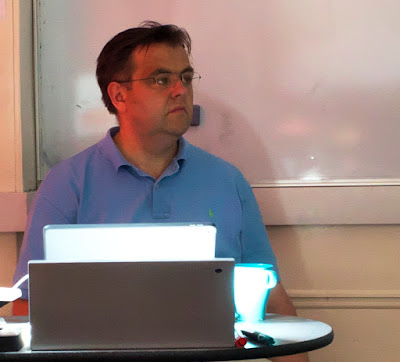 Thursday began with the presentation Ending the Universe by Arttu Rajante, who clearly is enjoying his research.  He presented an interesting talk on the Higgs Boson and what finding it means under the current Standard Model.  Basically the end of the universe will be driven by the Higgs Boson forming an expanding singularity that will eat the universe at near light speed; in about 10 ^ 160 years from now. 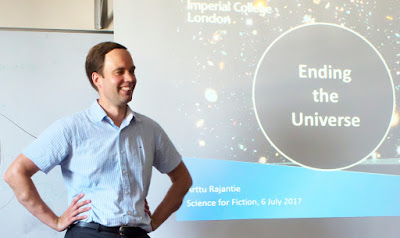 After  that the next talk brought us back to the present with a talk on Visiting Mars, with a VR Demonstration & discussion by Sanjeev Gupta who is a geologist who works with the Curiosity programme.  Fascinating stuff that discussed the historical development of Mars and future plans to explore the Red planet. 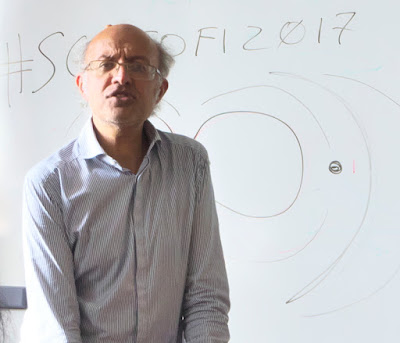 Extremophiles and Synthetic Biology by Robert Weinzierl was next.  Unfortunately my picture of Dr. Weinzierl has too much motion blur to use, which I didn't notice when I took it.  He discussed how life adapts to extremes and this fed back into the problems with sterilizing spacecraft that we want to send to other planets that may have life.

Forming Stars & Planets by Tom Haworth was the final talk.  He covered what we think we know, what we actually know, and what we need to know about how stars, planets and star systems form. 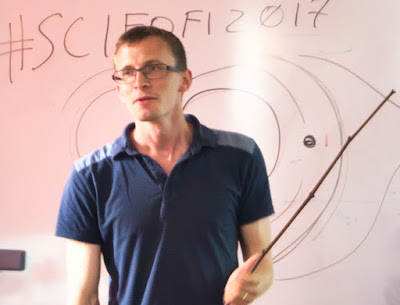 By the end of the final talk I was feeling pretty exhausted from the heat, which was not surprising given the temperatures in London.
Posted by  Ashley at 19:07 No comments: