As you can see I've tweaked the format of my blog and moved things around a bit.  Let me know what you think, especially if I've made hash of it.  This was done mostly because the Labels section is rather long and I wanted people to be able to find things without too much scrolling down the page to find things.

Just a reminder: I have other blogs, but only the modelling one is being kept up to date.

Unlike, for instance, Myke Cole or Larry Correia who occasionally put hobby related stuff on their writing blogs, I started blogging about my hobby stuff before creating this blog.  So this is a place where I can talk about my writing and what I read.  However, I will occasionally post hobby stuff here because the blog is about what I do.

So expect pieces on archery, cycling, photography and links to model making etc.  It's the way I roll.
Posted by  Ashley at 15:17 No comments:

Email ThisBlogThis!Share to TwitterShare to FacebookShare to Pinterest
Labels: Hobbies 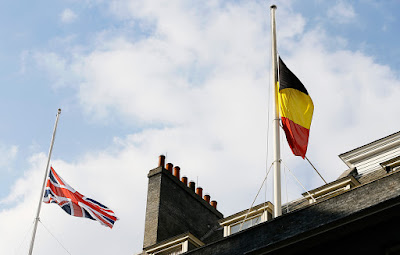 I missed posting last week because we were away in Cambridge with friends and partying, and I felt rather unwell all weekend and most of this last week.  Not quite coming down with something but fighting off whatever ailed me: coughing and stuff, including feeling really cold.  Today the sun is shining and I feel a lot better.

This week there was the horrible event in Belgium, a place that has wonderful people, nice restaurants and great museums.  I missed most of the reaction because I was at work and I don't have time during my clinics to be browsing the news.  All I can say I will not let this action make me fearful, because fear leads to hate and anger, and these are strong emotions that should not be unleashed otherwise one is pulled along rather than being in control of how you behave.

So another week has passed by in a flash, and I have writing to do, including an article for a new editor who asked me if I'd like to write a non-fiction article for him, which I will tell you about closer to the time.

In the evenings we've been chilling by re-watching Elementary, the American Sherlock Holmes series with Lucy Liu, which we've really enjoyed.  We've just received season three, hence the re-watch as it has been quite some time since we saw the series.  Paul Cornell talked about working for the show but his episode is in season four, so it's going to be a while before we get around to seeing his episode.

Dante's Peak, a favourite of mine because it has James Bond and Sarah Conner in it; sorry I mean Pierce Brosnan and Linda Hamilton but more importantly, as far as Hollywood films goes, the science behind the story is not the usual egregious nonsense one has come to expect.

We then watched The Omen, mostly because I had fond memories of David Warner using a Nikon F2 with a photonic head and Patrick Troughton, the second Dr. Who, and still one of my favourite actors who played the role over the history of the show.  The film has not aged well or perhaps I should say I've aged and my expectations of a movie are different now than when I first saw it back in the cinema circa 1976.

I also bought Contact, the Jodie Foster movie based on Carl Sagan's book as we both enjoyed it the last time we watched it.  It has aged remarkably well considering what they could do with CGI.

Finally, we watched a new movie, The Last Witch Hunter starring Riddick, Ygritte and Frodo with someone called Michael Caine who may or may not be Alfred the butler or whoever.  Vin Diesel played himself as did Michael Caine, so they were well matched.  Rose Leslie held her own, and Elijah Wood proved again he could really act by playing a part against type.  Though having seen him do that twice now in movies perhaps this is his new type?  I have to say that though the film was a confection of fantasy tropes, Vin Diesel with a beard, waving a flaming sword, and slaying witches worked for me.

This weekend is going to be chock-a-block with archery, eating chocolate, drinking wine, and rewriting the article I mentioned, just to reassure the editor who I knows reads this blog that I am working on his commission.  Have a good one whatever you choose to do.  Catch you all again next week.
Posted by  Ashley at 10:04 No comments:

Gentleman Jole and the Red Queen 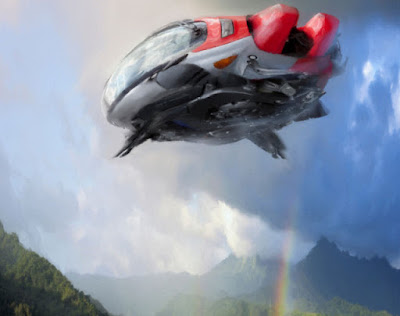 After a tiring day of archery on Saturday, and still recovering from a cold I took it easy on Sunday, and read Gentleman Jole and the Red Queen the latest book by Lois McMaster Bujold set in her Vorkosigan universe.  I couldn't put it down.  OK not literally, but once I started I had to finish it.  There are very few authors that do that to me nowadays.  I note that some people thought the title was long and made suggestions that the book should've been called Sergyar, but quite frankly I thought the title was most apposite: namely it describes the subject matter of the book, which in this case is about two people's relationship and grief.  There are other things going on, but the story is small in scope even if set with a large universe.

Writing wise I've been working on article for Henry at Miniature Wargames & Battlegames magazine that I started last year but which became lost in the sea of anxiety that was finishing my first novel.  Anyway, I completed the photo essay, which required me to take more pictures, as the first lot weren't right: I'd failed to set the ISO setting on both cameras to the same number (I was doing a compare and contrast shot of 12 versus 16 megapixels, which to be fair had to be taken at the same settings.

Since then, when not at work, I've been enthusiastically taking more pictures with my new camera.

So that's it for another week.
Posted by  Ashley at 14:31 No comments: 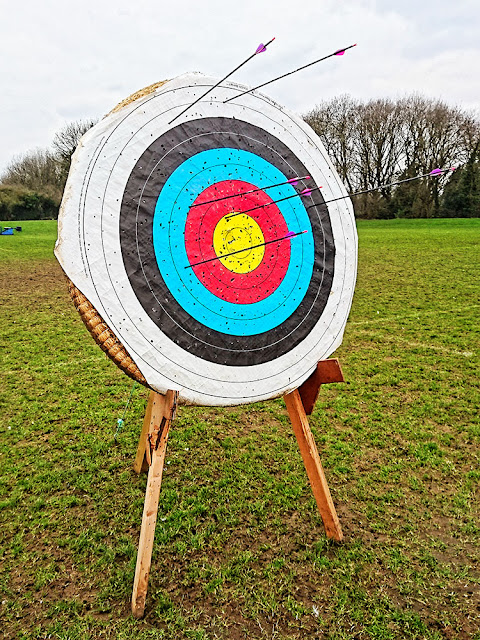 Back here I was bemoaning the fact I wasn't hitting the target in archery at 30 yards.  Above is a picture of last week's archery practice where I managed on more than one occasion to hit the butt at 40 yards with all six arrows, though as can be seen here not yet getting groups.  Most of the ends, which is what loosing six arrows is called, I only managed to get four or five arrows onto the butt on a regular basis but that's a big improvement from mostly missing or not reaching the distance.

The improvement is down to two things.

First my beloved upped the poundage of my bow through a technical process called tillering.  I've gone from 14 pounds to 16 and now up to 18, which is the maximum that the limbs can be adjusted to at my draw length.  So in another three months I will most likely be getting new limbs, but I'm taking things slow and easy because of my rheumatoid arthritis.  My technique has to be right otherwise I might cause an inflammation in my joints, but compared to Aikido or Iaido, archery is a low impact sport.

Secondly, I've been going most weeks since the end of November to archery classes and practice really does make perfect.  Though I still have to remember to keep my up, fingers under the chin, and the string must touch the nose.  Not to forget posture, posture and posture.  I'm having a lot of fun doing this and it takes my mind off the novel and getting my second rejection.

Apart from archery we have been celebrating my birthday and our tenth wedding anniversary.  We had 46 friends turn up to help us celebrate to eat, drink and be merry.  I must admit that by Sunday I was feeling a bit like a zombie from not sleeping too well after so much excitement and rich food.

I've been spending quite a bit of time re-reading Mastering the Olympus Olympus OMD E-M5 Mark II, by Darrel Young & James Johnson, after confusing myself with programming my camera and then not being able to get it back into hi-res mode.  There were three days of high anxiety where I feared I'd managed to "brick" it.  Fortunately, with a little help from an Olympus camera technician and going through the book I worked out how to fix my problem.  I've now demonstrated the menu button sequence to my friends and every single one has gone WTF over the logic of setting up the hi-res function.

As an aside I re-read the online review DP Review where they say,


"All of this isn't helped by Olympus's trend of adding more and more extra features without fully integrating them.  For instance, the high res mode offers a choice of delays before you start exposure, but this isn't controlled using the part of the menu that adds a delay for standard shooting."

I now understand truly, fully, deeply what those words mean, but I still wouldn't trade my new camera in for any other model because while it's a complicated little beast it is stunningly good.

So that's it for another week.  Have a good one.