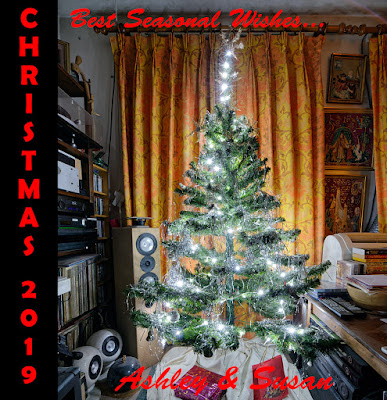 And I sit here typing these words, wondering where the heck did December go?

But they have flown by, so it must be time to wish you all a very Merry Christmas.

The other night I awoke thinking about which dead authors I would like to talk to.

The first one would be Isaac Asimov. Having my bum pinched by him would be a small price to pay for talking to the man who aroused my interest in science. Besides it's apparent that he was a damaged person whose neuroses impacted him, if I could go back and offer him therapy, who knows how it may have changed him.

After that it would Robert A. Heinlein, the first science fiction author whose books I bought as a lonely child, to pass the time during a wet summer holiday in Ilfracombe, where my family went every year (BTW: William Shatner's comment about Ilfracombe makes me laugh). He was a survivor of tuberculosis and a life long stammerer.

Arthur C. Clarke, who I saw once and met at a one day convention in London, back when it was possible to meet authors at really tiny events. It would be nice to sit down and talk to the man who has probably inspired my writing the most. The pillars in my Gate Walker series are a homage to the Monoliths of 2001. Another author who struggled with prejudice.

After that, A. E. van Vogt would be the next author I would've liked to have met and talked to. Much derided by Damon Knight, which destroyed van Vogt's reputation, his story The Black Destroyer, which I read in The Voyage of the Space Beagle, stands as a testament to how wrong Damon was.

Then Cordwainer Smith, pseudonym of Paul Linebarger. Gosh, I imagine a great discourse ranging from his Godfather Sun Yat-sen to his work in American intelligence, psychological warfare, and perhaps even talking about his experiences with psychotherapy.

Also Robert E. Howard, along with Novalyne Price. I would admit that the temptation to do couple therapy with them, and help Howard with his depression would be a thing. Imagine if they'd married, and he had lived.

Finally, H. P. Lovecraft and Sonia Greene, again this would be one of those situations where I would be tempted to do couple counseling, and help the very damaged Lovecraft with his crippling neuroses to live a happier life.

Sweet dreams are made of this.

PS: A takeaway from this is that all the authors I admire were products of their time and damaged in some way or another.
Posted by  Ashley at 15:13 2 comments:

I imagine that most science fiction fans will be familiar with the so called Fermi Paradox. From Wikipedia that quotes the Hart-Tipler argument:

3. Even at the slow pace of currently envisioned interstellar travel, the Milky Way galaxy could be completely traversed in a few million years.**

I don't think there is an actual paradox, and I'm not the first to come to this conclusion. I'd be shocked if I was.

But here's the thing I realized.

A first order approximation for going around our galaxy at light speed, assuming you don't stop, would take 314 thousand years. The minimum if stopping once (as in go halfway around the galaxy and colonize one planet), and you would have to quadruple that to allow for acceleration and deceleration, which means 1,236,000 million years have passed.

Okay, that doesn't sound so bad, but assuming you want to stop at all the planets that can support life (minimum approximation 100,000***), then one has to make a decision how many expeditions can be sent at the same time.

But I seriously doubt that one can colonize the galaxy at a one-to-one equivalent of light-speed.

Therefore, starting again with the assumption that the galaxy can be colonized, then it will have to be done at sub-light speeds. The best theoretical drive would be a black hole (the interesting stuff in the video start at around 8 minutes). For a more detailed explanation of a black hole drive aka Torch engine.

Even so, my best guess for the maximum speed would be 0.5c or 0.25 average for a journey to allow for deceleration again. But that's a highball number, 0.1c or 0.05c average might be more realistic (for definitions of realistic when applied to engineering that's way beyond our current level).

If we take an average of the highest and lowest times then it would roughly take 31.4 billion years to colonize the galaxy.

So, the universe hasn't been around long enough for us to meet aliens.

NB: When I finished this I realized that there was yet another way to calculate the time to explore/colonize the galaxy and that was work out the average distance between habitable star systems, which a ball park figures comes out to 3,126 light years.****

So running the numbers will depends on how many expeditions you send out. The minimum would again be quite modest 3,142 years, but I don't think it's feasible to travel that fast.

Assuming 0.1c, then the minimum would rise to 31,400,000 and obviously rise higher since the assumption is sending 100,000 expeditions out at once. Your guess is as good as mine about how many expeditions would be sent and how much time would occur between them.

So again I'm left with the conclusion that we haven't been around long enough to have met or discovered aliens.

Addendum: There is another explanation for lack of contact too. It's by Geoffrey A. Landis and is called, The Fermi Paradox: An Approach Based on Percolation Theory. It comes to the conclusion that given how large space is, not all possible planets will be colonized (physic theory of percolation).

In conclusion, this is what I research when writing. Enjoy.

* The Drake Equation.
** Not feasible unless you have faster than light travel.
*** No one really knows (see The Drake Equation for the assumptions) as there could be one or two trillion stars in our galaxy (1,000,000,000,0000 to 2,000,000,000,0000 stars).
**** Figure derived from a first order approximation of the volume of the galaxy divided by the number of habital star systems to arrive at an average distance between them.
Posted by  Ashley at 10:11 2 comments: