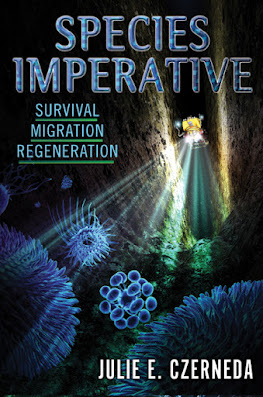 Species Imperative is the 10th anniversary edition of Julie Czerneda's trilogy: Survival, Migration, and Regeneration.  I read this book because it was highly recommended in reviews for its portrayal of aliens.  Czerneda has a background in biology and it shows in her writing.  That's a compliment.

Let me start with the negatives.  The omnibus edition is so heavy I had to wear my wrist braces to hold it while reading.  I can forgive this book being so long because it's an omnibus of three long novels; so no complaints here about the length of the story as I did with George R. R Martins first Game of Thrones novel.  I'm not averse to long books, just books that go on too long.

Second nit-pick was the romantic sub-plot that runs through the three novels.  I found it intruded into the plot and could have been edited without affecting either the main story or the protagonists development, but other people may well disagree.

The third nit-pick are the titles.  For me, they were too on the nail and gave away the plot, but there again I'm a writer who has a background in psychological medicine, and I'm sensitized to things that seem obvious to me.

What I loved about this book was the biology, the way the aliens were described and developed and the overall story arc.  It was a compelling read, as in I found time to pick the book up and dip into it, whenever I had a twenty minutes or so to read.  This isn't a military SF novel despite the fact that the plot involves the destruction of worlds as an implacable alien force literally eats everything in its path.  There are some descriptions of battles and skirmishes, but the focus is on the biology driving the aliens actions (there are several factions).  And I really felt for the plight of the aliens who were not just humans with rubber foreheads.

So check it out, it's a hefty read, but well worth your time and effort.

The Span of Empire 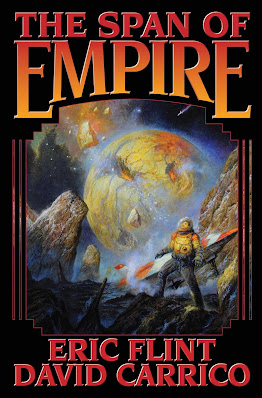 This is the third novel in the Jao series, the first two novels in the series I reviewed here and here.  I bought the The Course of Empire on a recommendation that it had interesting aliens.  Given I'm writing a bunch of aliens where my Beta reader said I could do with upping my game, I gave it a go and fell in love with the story.  The sequel, The Crucible of Empire, hit all the spots, but K. D. Wentworth who brought so much to the series died fighting cancer.  Therefore, this third volume David Carrico has to take the torch and carry it forward.

From listening to the Baen podcasts I know that Carrico wanted to do justice to Wentworth's characters, but I inferred from what he said that he needed the freedom to do his own thing.  Without giving away any spoilers, what we see in this story is the addition of new aliens, a nice expansion of the Ekhat position, and as a result a culling of those characters that weren't driving the plot forward.   I was also left wanting more, which is always a good sign in a series.  This story felt fresh and has the potential for some real plot fireworks when forces collide.  Recommended.

For me the take away was the aliens, and this book and another I will talk about next time are making me rethink my portrayal – description of and interactions with – the aliens in my second novel, which I'm currently working through to address the deficits in my story telling. 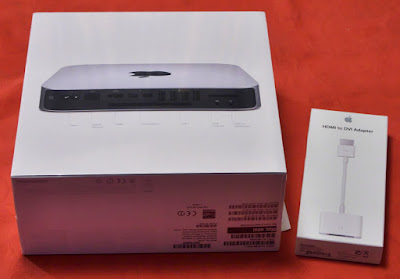 After nine years of using my old Mac Mini it came time to part ways.  Mostly amicable, but the old girl was getting slow and crochety.  A bit like its owner, and the limits of my patience was frayed to its limits from the machine's sluggishness.  After a discussion with my partner, we scraped together the money, which effectively means all my disposable income has been spent for the next few months.

After a suitable amount of anxiety in getting said machine connected, files updated, getting the settings from my back-up transferred, and moving all my work across I was able to breathe a sigh of relief.

Things are now moving along at a respectable pace: programmes open promptly, picture processing is no longer like watching paint dry, and all is well.   Colour me content.
Posted by  Ashley at 18:19 No comments:

The reason I started writing about Sergeant Lara Atsuko Tachikoma, of the Confederated States Marine Corps 1st Combat Armor Reconnaissance Company, Second Platoon, Bravo Squad, came after a phrase popped into my head one day, while I was stuck writing something else.  The phrase was:


It’s all Big Dog’s fault that I died yesterday under a mountain in Afghanistan.

I say this, but the truth is that I wrote the idea down and put it to one-side as I was in the process of writing another story.  The good intentions to put it aside and finish the novel I was then writing it didn’t work out so well.

As a cognitive behavioural therapist I know the difficulties around changing behaviours that are triggered by beliefs, and where behaviours are functional, there is little benefit in trying to change the beliefs that drive them.  In this case I wanted to write, so whether or not I continued writing the other novel, or changed to the new one didn’t matter, because neither was being written on commission.  I'm not yet a professional author under the yoke of meeting a deadline for a commission, which is probably a very good thing, as I had neither the experience nor skills to meet such a task while writing fiction.

However, the first thing I do when I have an idea for a story is to sit down and write a pitch line.  The one line pitch for Bad Dog was Starship Troopers meets Ground Hog Day.

Except that Bad Dog is not really a homage to either, in spite of the shared surface similarities they have.  Heinlein’s novel is a story about service and citizenship, while Bad Dog discusses military service from the implications arising from putting all your troops in power armour, and the social implications where gender equality in war becomes a practical reality.

This SF geekery draws heavily on the theories of Professor Max Tegmark, a cosmologist at the Massachusetts Institute of Technology, who is also the scientific director of the Foundational Questions Institute.  On reflection I thought while the pitch line was certainly high concept it didn’t really describe what my novel was about.

So I came up with a new pitch line that was closer to other sources of inspiration, namely VOTOMS meets Stargate SG-1.

However, the problem with this is that VOTOMS is a real niche show even by the standards of SF fandom, which means that it will probably fly over the heads of most people who read Bad Dog, with the likely response being huh?  While those that know of VOTOMS will no doubt be going why is she ripping off our favourite show?  And while Bad Dog shares with the well known Stargate franchise, the idea of the military travelling to other worlds, the limitations imposed by the physics behind the pillars in Bad Dog make for entirely different stories; as I have to account for the lack of control over where the pillars go, and when they allow the characters to go there.

So again the pitch line didn’t hit the spot, no matter how zingy it might sound.

The importance of a pitch line, or what is called in the film business a logline, is that it encapsulates the concept of the story in one easy to understand sentence.  So I went back to the beginning, and thought through what my story was about and constructed a pitch line that was less high concept, but more authentic to the voice of the novel:


When an American Special Forces Detachment crashes in Afghanistan, Sergeant Tachikoma's Company of Marines are sent to discover what happened to them.  But the local Warlord fears the evil Afrite will be unleashed evil into the world if the Americans find the ancient, alien pillars under the mountain, and he has conspired with the Chinese to destroy Sergeant Tachikoma's Company with a nuclear bomb.

For me this encapsulates everything that was in the high concept one-liners I had written before, but made Bad Dog a separate thing in its own right.  In the process of doing that I came up with a short synopsis that could be used on the back cover.


For Sergeant Tachikoma aboard CSN Hornet it was just another day in the Corps.

Then an order came down the chain-of-command proving the truth of the old adage that the only easy day is yesterday.  Now the 1st Light Armored Reconnaissance Company is preparing to fly into Afghanistan and rescue an Alpha Detachment of Special Forces Snake-Eater that had crashed their Ares sub-orbital space-plane during a Top Secret mission.

After dying in a nuclear explosion, she wakes up the next morning to find herself going crazy reliving the same day all over again.  She decides it's better to get even with those who blew her and the rest of the Company up.  Her plan is simple; stop the bomb going off, and get on with the rest of her life.

How hard can it be?

While I was writing the above, thoughts started to unfold in my mind, about why I was driven to explore why I wrote Bad Dog in the first place.  The answer being it’s complicated, but the bottom line is that I was telling a story by running my character through a gristmill, and throwing problems at her to make her life as miserable as possible, because as an author that's the way we roll.
Posted by  Ashley at 12:21 No comments: