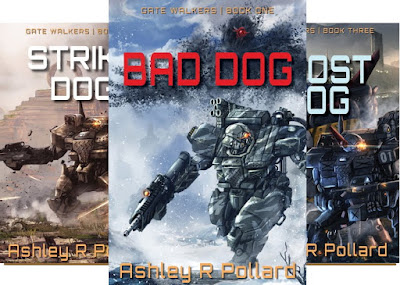 The titles for the first trilogy were inspired by this quote:

You will die like a dog for no good reason.
—Ernest Hemingway

About the Gate Walker Series

My stories are driven by the Fermi paradox, asking how the military and scientific communities might work together to discover advanced alien science and engineering, while overcoming the logistical problems arising from exploring strange new worlds.


In 2071, Sergeant Tachikoma leads a Marine combat armor squad. She knows the Corps never promised her a rose garden, only the chance to fight for her country.

Now, she faces her greatest challenge, two terrifying alien pillars that trapped her into reliving the same day again. The day she dies.

Today, she needs every ounce of courage to save her people from annihilation.


After completing her officer training, Lieutenant Tachikoma faces a new challenge. Now she leads mankind's first mission to another world.

But when the mission becomes a first contact scenario, the stakes rise.


Newly promoted, Captain Tachikoma nows lead her team to another world. They have to go through a portal that only opens once every six months.

Her mission. Retrieve unimaginably advanced alien technology that could change the world. Keep her team alive with only one chance to return.

Nothing could prepare her for what waits on an alien planet.

This gripping addition to the Gate Walker series, humanity expands its exploration of the galaxy to reveal more secrets, in "Ghost Dog" Tachikoma needs all of her combat armor skills to get home.

“This story is great, with a very firm grasp of the Marine Corps lifestyle.”

The Gate Walker series on Kindle at Amazon US

The Gate Walker series on Kindle at Amazon UK

The Gate Walker series on KOBO at Rakuten