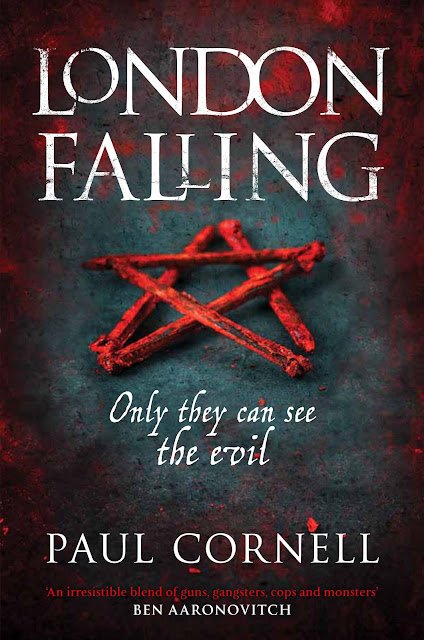 When I was preparing to write this piece I was going to say and see my review of London Falling, only to find that said review exists only in my imagination.  Well this post is going to transfer my thoughts about reading London Falling and its sequel Severed Streets from the interior of my mind into something that can be read on the internet.  Such is the power of the blog!


A disclaimer.  I vaguely know Paul Cornell, but there again I'm acquainted with a lot of authors, but only because we tend to hang out at the same places; conventions and parties.  It's not some secret members only club or anything like that.  I met Paul at a SF convention.  I saw him on a couple of Dr Who panels, and threw a few questions at him about the Time Lords and the Daleks, which garnered a reply of, "Have you been spying on our writing meetings?"  We've also talked in passing, as well as being on a panel together.  In short he's a likable person.

I've said before that urban fantasy is not my core interest, but I will read books that have interesting premises written in the urban fantasy genre.  We heard Paul read an extract from London Falling at the Olympus 2012 British SF EasterCon, which led us to go and buy a copy.

London Falling is promoted as the first book in the Shadow Police series, and introduces a grimdark London where all is not what it seems.  It's effectively a realistic present day police procedural novel set in an urban fantasy setting.  Overall I quite enjoyed the story, but there were times when the tone of the novel went places that were not very entertaining.  Or to paraphrase my friend Roger said in his review (warning spoilers), the story is full of unpleasant people doing unpleasant things to other unpleasant people.

However, I enjoyed the first well enough to want to read the sequel.

Severed Streets starts well enough, delivers a shocking development, and then the middle wallows around until the highly telegraphed plot twist, where it all picks up again, and comes to a reasonably satisfying conclusion.  But Paul Cornell's tendency to fall into describing the nostalgie de la boue does at times overwhelm the joy of reading the story.  My main gripe is that the novel does not deliver what it promised at the end of the London Falling.  Namely what happened to the old guard?  My friend Roger has a review with spoilers here.

On a lighter note, much lighter, we are burning through the last series of Xena: Warrior Princess.  Season five was very good and this one is managing to maintain the quality of the stories.

Writing wise I've been working through Alix's, one of my Beta readers, line edits.  I managed to do just over the first hundred pages before going on holiday to Provence, but only managed to restart work this week, because I became distracted by the controversy surrounding this years Hugo awards.  Looking in my diary tells me that I've edited 40,437 words this week.

So on that note I'm going to finish as I want to finish the edits for Bad Dog today so that I can start working on my Alpha readers feed back of the second draft of Strike Dog.

NB: Edited to include another link so that one can compare and contrast reviews.  Roger reads and reviews a lot of books and is well worth book marking his site.

Also, added as a reflection, this review is way too critical of a good writer. My apologies.
Posted by  Ashley at 15:49