Lion of Comarre & Against the Fall of Night 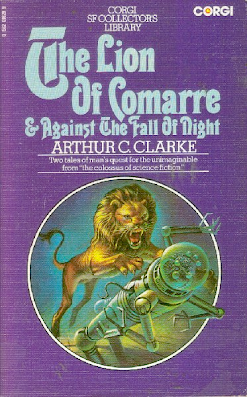 Four weeks ago I reported that my writing total for Ghost Dog was ahead of the curve compared to the same points during Bad Dog and Strike Dog by about ten thousand words.  To my chagrin I now find I'm two weeks behind at the comparable point, which means twenty thousand word behind.

Such is the vagaries of writing, that or my general ineptitude.  This weeks total was respectable enough though with 6,723 words put down, which bring the running total up to 59,492 words.

So some angst about being useless and perhaps I should seek out a career in shelf stacking, but on the other hand Ghost Dog shows me I can write multiple books and that my writing style is growing.  Whether or not anyone apart from me, my partner and the plush toys will like it is another matter.

This week I re-read Arthur C. Clarke's The Lion of Comarre and Against the Fall of Night, which I have in a Corgi edition that contains both stories.

I really wanted to re-read Rendezvous with Rama, but no longer have a copy, as I was looking for inspiration for some scenes involving ancient civilizations that I need to write.  Anyway, not the best character writer in the world, but he certainly knew how to think up big ideas, and like most SF fans of my age, one of the big three that I read avidly when I was younger.

Moment of geekness; I just edited Wikipedia as they failed to list The Deep Range on his page, even though the novel has its own page.

Nearing the end of our Stargate SG1 original series marathon this week.

Season 9 actually got better as it went along and the end of season finale was very good leaving everyone in jeopardy.  Just started season 10 and so far I've really been enjoying watching the show.  Perhaps not as good as season 6, but it runs it a close second.