Metaphors are the terrible fate that comes to take reason and sanity from 'English majors,' assuming they had any to begin with. Considered yourself warned. Step back from the metaphor.
This has been a Public Health Warning for Metaphors. Stay safe, avoid analyzing stories for metaphors.
Posted by  Ashley at 13:39 No comments:

The Tomorrow War: A Paradox 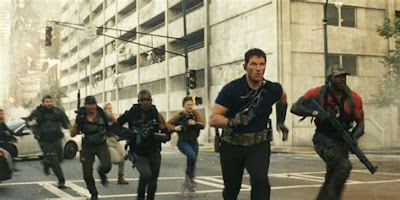 I'm now going to defend The Tomorrow War by dismantling the criticism I've seen on social media. Wish me luck. Rule number of of time travel paradox movies is that it's a paradox. As such the ending will always seem contradictory.

At the beginning of the story, travelers arrive from the future and announce they are the few remaining survivors and blah, blah, blah.

Notice that the story then skips forward by a year.

Therefore, any sensible response that you can think, of has happened.

For example. We now know that time travel is possible and we start researching how to make a machine, because why wouldn't you?

We also know in passing that the world's militaries rally the troops and send them forward to fight.

A Year later the losses are horrendous.

Thirty years of preparation go by, but guess what? The aliens don't land in a fancy spaceship, and have bred vast hordes in the faraway places, and before you know it countries start to fall.

Okay, that's a bit farfetched, but assuming no one goes nuclear, it's as plausible as World War Zombie.

The creature breed like rabbits, eat like locusts, and by the time the nuclear option is on the table it's too late.

But at least they have the time machine, and can go back and try again.

We have a hint that this has happened because the heroes daughter tells him how after he came back from his week long tour he was a changed man.

And there's the paradox.

Each time the machine is used you get a slightly different outcome until the time comes when you solve the problem.

Really, is it all that hard for people to see this?

Have at it, roast me social media.

To say I've been incredibly under active, and incredibly feeling down over the last two years would be rather obvious. I've found myself rather affected by the deaths of some acquaintances, who in most cases died far too young. But, the whole world has been turned upside down, so it's not just about me.

Needless to say we have watched an incredible amount of shows on Netflix and Amazon.

First the fun happy one. Queens Gambit, which I wasn't at first all that keen on watching. Probably down to the way it was 'sold' by Netflix with the blurb, "Orphaned at the tender age of nine, prodigious introvert Beth Harmon discovers and masters the game of chess in 1960s USA. But child stardom comes at a price."

Other reviews used big words like intersectionalism. Ignore them. Yes the show used the trope of drug and alcohol dependency, but it is so much more than that. It's about the passion for chess that the lead character is obsessed with, and how she overcomes problems. I like shows where characters grow by overcoming problems.

The other show that knocked my little cotton socks offs was Dark. Another Netflix show, not only made in Germany, but also in German. We watched it with subtitles, there is the option of an English dub. But, Susan has a fair grasp of German, and I soak up tone and accents from listening to foreign languages. It was how I learnt a lot of Japanese.

But that's a digression.

Dark has three seasons for a total of 26 episodes. It's a complete story, and tightly plotted. Think "By His Bootstraps' by R. A. Heinlein. I described it to a friend as a cross between The 12 Monkeys TV show, with the technical obsession of the movie Primer.

Also, the music is outstanding, both diegetic and non-diegetic (music heard by the characters and music for atmosphere and soundtrack. I loved it. Susan found it difficult to keep track of the the familial relationships, which is complicated. Not helped I imagine by the different time periods and the aging of characters by using different actors.

Regardless. Compelling viewing if you like time travel paradoxes, mysteries, and psychological dread.