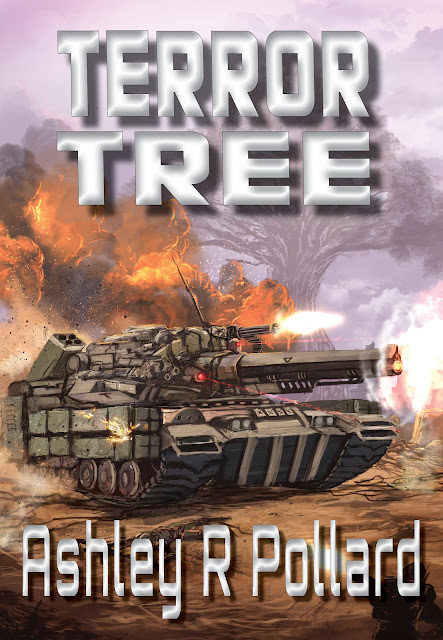 Imagine a future where humans face Artificial Intelligence systems controlling the machines of war. “Terror Tree” is a science fiction short story that asks the question: What if this goes on?

This is a short story that inspired my World of Drei series, but is separate from the continuity of that series. It includes chapter one from my novel Bad Dog. It's low priced so that you can get a taste of my writing.

In 2071, Sergeant Tachikoma leads a Marine combat armor squad. She knows the Corps never promised her a rose garden, only the chance to fight for her country.


Now, she faces her greatest challenge, two terrifying alien pillars that trapped her into reliving the same day again. The day she dies.

Today, she needs every ounce of courage to save her people from annihilation.

Very interesting. The character is an AI. Looking forward to more from Ashley

Very interesting. The character is an AI. Looking forward to more from Ashley. She is a very talented writer and story teller.

This excerpt has done nothing other than whet my appetite for the rest of the book when it comes out. I was given a copy to review. I must say it was a quick and engaging read. Very enjoyable.

I really enjoyed this short story, the writer was able to bring the cold logical voice of the AI into the narrative and tell a story in the first person, which is no mean feat.

the reader is left wondering about the back story of this conflict as we only see it from the tanks perspective as it returns to combat, learning more and more on each occasion.

the first chapter of the next book, that is included has also wet my appetite and I'm looking forward to finding out more about this universe

An interesting POV take on where the future of AI driven armoured combat could go.

Particularly apposite with the recent news that Russia's military has a new armed robot tank (the Nerehta, which can be fitted with a 12.7mm or 7.62mm machine gun or an AG-30M grenade launcher) that outperformed manned vehicles in recent exercises, Colonel Oleg Pomazuev told the Russian news site Military Review, as well as Russia's taking a hard-line on the United Nations' proposed ban of Lethal Autonomous Weapon Systems (LAWS).