SF Furore Part 3: Standing on the Shoulders of Giants


Continuing my dive into the rage that is SF fandom.


Hey, look! A buzzy, angry hornets' nest! What could possibly go wrong if I jam my face into it!(Or: why the "science fiction canon" is already dead and people should just let it fucking die, already) from John Scalzi Twitter feed, link to his blog.

Yes; because I agree that there's no need for readers to read the past, but without knowing the past it can be hard to understand the present.

No; because writers stand on the shoulders of those who came before. Readers read stories that are in dialogue with the past. So, no one has to read Mary Shelley's Frankenstein, though I think she wrote Gothic Horror, which is not SF. However, her work speaks to the human condition.

Maybe; because, this is all just opinion, which is fine, but it's just opinion about things that one can't actually control. Furthermore, starting arguments by creating unnecessary confrontations will lead nowhere good.

I don't shun people who have views antithetical to mine. That doesn't mean I go out of my way to socialize with them either, only that I recognize that other people's opinions are different to mine, and are not my concern.

I see the root of these confrontations as having stemmed from our cultures economy creating technology that has outgrown our ability to cope with the stress it generates. So, I get why that can be threatening, especially if one feels disempowered, or disenfranchised, these are strong emotional triggers.

But, real diversity means tolerating ideas antithetical to your own; arguing against them not with emotional outbursts, but reason. By all means, emotions will drive the discourse, but don't let emotions overrule reason.
Posted by  Ashley at 13:57 2 comments: 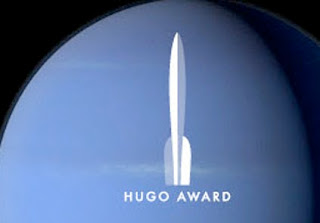 I'm gonna go ahead and say this for the cheap seats: What's the necessity for the Retro Hugos again...? It's not as if these titles don't already dominate discourse making it difficult for us newbies to ever achieve 'classic' status. Because I'm tired of racists and bigots. from Tade Thompson's Twitter feed.

Well... my first response to seeing this Tweet was:


We're all tired of opinionated people who think that their opinions are more important than being kind to others.

By-the-by Tade, if you're chasing classic status, I suggest you'd be better off writing another story. I would also add, that if any writer thinks they're work is worthy of being labeled a 'classic,' it will become so on its merits.

It's also well to remember that all great writers were once 'newbies.'

Also, it's almost impossible to discuss the topic of 'classic' works of the past, when people who are offended by them label the creators as racist and bigots. Any discussion becomes mired in controversy, because the topic is seen as defending the indefensible.

However, hold on a moment, here's my take.

I know the movement started by calling out 'recent' problematical writers, editors, and artists (and by recent anything with the last century), but I've got to ask, when are we going to stop? Also, worth asking, what makes anyone qualified to cancel artists, and or the people who like that artists work, which only leads too more questions?

But if you cancel creators who offend you, who gets canceled next?

And, when does the 'cancel movement' stop? By this I mean, both when as in how long the canceling goes on, and when as in the historical cut-off date.

What those promoting cancel culture seem to have forgotten, is that labeling past SF authors as racists and bigots, by suppressing their work, is the first step of turning people into 'things.'

I would also argue that this is made worse by those who support the labeling living people who like older works as racists and fascists too. I mean, labeling people as things is arguably what leads to bigotry.

This may sound a touch polemical, but I would argue is even worse, because the dead no longer care, whereas the living do. Think back to the Puritans as one example where their desire to cancel the culture of their time led nowhere good.

And one more thing, Tade; the Hugo's didn't come into existence until 1953, and if you think that SF didn't start before that date, then you're sorely deluded.
Posted by  Ashley at 18:20 1 comment:


Another year has passed. Another set of Hugo's have been won. And another row has broken out in fandom. What a surprise. Not!

For those who aren't up on the history of science fiction, let's just say that the roots of SF, as a genre, began circa 1921 (give or take), as a way of justifying literature that wasn't aimed at improving the reader, but rather providing some entertainment.

The SF genre started in the pulps as mere "entertainment," that has arguably evolved over the years into a literature that examines the impact of technology on the human condition.

Arguably, because a genre is just a marketing category. Whether or not stories have to comment on the human condition versus just being entertaining is arguable; an opinion, not a fact.

A reminder, last year Jeanette Ng won The Campbell Award for best new author, which I commented here, resulting in it being renamed The Astounding Award (technically not a Hugo, but awarded at the Hugo ceremony).

This years row is over various faults like: how dare George R. R. Martin's mispronounce authors names; the time that the virtual award ceremony ran with his waffle; then the final straw, GRRM mentioning the names of people who won this years Retro Hugo awards, promoting their importance to the genre, despite having been deemed unmentionable, after Jeanette Ng canceled them.

Arguments over these issues that have been all across SF&F social media.

Comments from both SF&F fans and professionals, commentary that frankly beggars belief. It's like children calling each other names in the playground, except these people aren't children, and an an awful lot of them want to cancel writers who they find problematical.

Please don't get me wrong on this, one has to face the fact that neither were nice men, but what they brought to the world has value beyond their faults.

Both of Lovecraft's parents died while confined in a psychiatric hospital, and as a child he had chorea minor, and later what appears to have been atypical depression. He also died at age 46; health outcomes back then were poor, and today we know that both genetics and the environment can affect how people grow up to become who they are.

None of which forgives his bigotry.

But, to deny his contribution to SF&F for being a bad person is just plain wrong.  He wrote within a modern tradition of existential nihilism, explored the delusions of living in an anthropomorphic universe, and addressed mankind's insignificance in the cosmic scheme of things.

Creating the Mythos alone, argues that Lovecraft's influence transcends his feet of clay. That and the fact that he is still being discussed till this day, inspiring writers to create cosmic horror, says it all.

Campbell's contribution to SF&F are twofold: he wrote (Who Goes There, which became the film The Thing); and his editorship of Astounding Magazine.

He died at the age of 61, which would now be considered young. And I couldn't help but notice that his pictures show him smoking. We now know that smoking affects the respiratory system, and blood circulation to the brain.

I mention this, because as Charlie Stross once observed, isn't it funny how men of a certain age tend to have changes of personality from health issues (high blood pressure). Again, none of this forgives his bigotry but, those times were not our times.

Things were different then. To deny that Campbell totally reshaped the genre, transforming SF from its Pulp roots into a discussion of how technology will affect the human condition, and cancel him, is again just wrong.

By all means have an opinion. But stating opinions to generate arguments, which are not facts, is pointless.

One doesn't need to subscribe to the values of creators to see that their creations add to the richness of the human condition. Not withstanding the fact that both Campbell and Lovecraft were both crazy nut jobs, men with feet of clay, doesn't mean the good they did should be thrown out with the bad.

Jeanette Ng, and those who support canceling people are doing more damage to the genre than either Lovecraft or Campbell.

NB: *1915 according to Pulp Librarian @PulpLibrarian

#OtherOpinionsAreNotMyConcern
Posted by  Ashley at 16:38 No comments: