Last week we went away for the Bank Holiday weekend. We had been invited by Pip Bickerstaffe to the Barlborough Longbow shoot run by the Sherwood Forresters Longbow Archery Club.

Saturday was a lovely day of shooting.

We were competing in what is called a Clout. Those of us with light bows were aiming at a flag placed 120 yards away (heavy bows were shooting at a flag 180 yards away), and the arrows are scored by how close they hit ground around the flag. We shot five dozen arrows in flights of six.

The first two ends were more about me finding my sight picture. The final dozen I found myself flagging a bit, because drawing a 32 pound longbow is a bit of thing. My recurve is 29 pound, though it should be said that they're not exactly equivalent to one another.

After a short break there was a chance to shoot a moving target, a Red Jedi Knight standee that was drawn diagonally across the field at walking pace. Susan hit him in the eye which was quite an achievement, and got a certificate.

Sunday the weather was less clement. Rain coming sideways across the field at one point.

This time we were competing in a Rove: it's like a Clout, but you move around the field and sometimes there were animal targets. Susan hit an Owl that was suspended above the ground, at about 60 yards, and got another certificate. I came second in the Rove, which was a bit of a shock as I didn't think I'd done very well.


As for my writing, I did an article for Galactic Journey, which took longer than expected.

I was a bit beat up from all the exertions of the weekend, as I over did it. However, I'm still on course to finish going through the copy edit of Ghost Dog by end of today. Next week I plan to look at my Beta reader's feedback on Mission Two: the next story in The World of Drei series that I'm writing.

One final note; I got my first review on Amazon for Mission One from the "Book Reader." Thank you for taking the time to read my story and write a few words. Most appreciated.
Posted by  Ashley at 13:27 No comments: 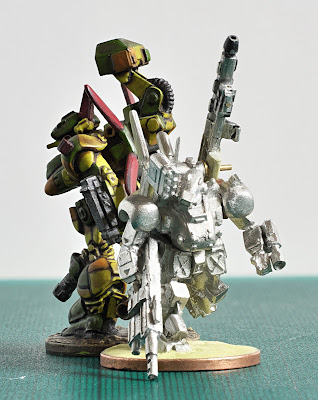 This is a picture I took after seeing the sketch for the cover of Ghost Dog. It features Captain Tachikoma's CASE-2XC-Mod 2 Dog standing back-to-back with Master Sergeant Ferretti's Air Force security Buster CAS-C4P.

I've just received back the copy edit of Ghost Dog and my plan for the week is to go through and review all the edits. Once done, I'll send it off to my specialist Beta reader, because no matter how good my research is, a real US Marine knows the gribbly details far better than me.

Realistically, I'm faced with taking medication for more than a year. Therefore, I'm pretty sure that before the treatment ends, there will be days when it will feel like two-steps-forward and one-step-back. Other than that, things are good.
Posted by  Ashley at 13:10 2 comments:

OK, a quick update and status report on yours truly.

Last week I went to hospital for a review of my rheumatoid arthritis and the long and short of it is that I'm slightly less well than I thought I was. My usual response to a flare-up of symptoms is to take an ibuprofen tablet (Motrin or Advil in the States) and suck it up.

This time it seems I may have underestimated my symptoms: as in my doctor gave me slow release corticosteroid injection, then ordered blood tests, a chest x-ray, and I left with a bag of medication to start on, with a second to be added in three to four weeks (two part DMARD therapy).

But the upside is that it has clarified a lot of things that were niggling me, like feeling constantly tired and unable to sleep because of being woken by pain. And, with the clarity that comes from twenty-twenty hindsight, I can see that the problem grew over about three months, because there was a drop in my productivity.

And I also note, my archery scores. Not to mention my inability to hold tools to make models.

It may take three months to get me back to "normal," for definitions of normal that are set by age and diagnosis, but I'm determined to not let this bring me down. For a start, I know that even at my worst I can still write. Frustratingly slow, but a little each day adds up.

1. The World of Drei Mission Two is now at my Beta reader. Strike Back, the next installment is now at 2,955 words (episodes run between ten and twenty thousand words apiece).
2. Two Moons, a Gate Walkers sidequel featuring Mr. Anderson, is running at 11,532 words.
3. Red Dogs, the next Tachikoma novel, is running at 6,458 words.
4. The Bureau, my first novel that has been side-tracked by writing combat armour goodness, is still ongoing with 55,134 words, which is within striking distance of being completed.

So there's a lot in the pipeline, all I have to do is keep writing a few words each day, and while I expect my treatment will slow me down, new stories are coming. I'm having too much fun to stop writing now.
Posted by  Ashley at 17:46 No comments: 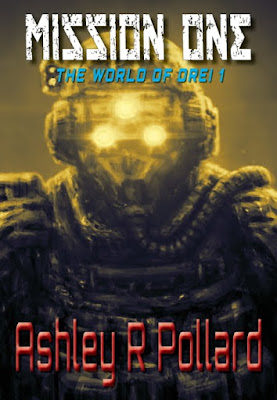 For five days Mission One is free on Amazon.

And the sequel Regroup is only 0.99 pence too.

Sergeant Sergei Rozhkov chose to face adversity with stoicism. He was Russian and held to a simple truth that everyone dies in the end.

Besides, there was always vodka if things went really bad.

Rozhkov had lost good people in the war. But, he didn't think that the war could get any worse than it already was.

Mission One, sequel to Terror Tree, unfolds the setting of The World of Drei series. This is military science fiction that asks, what will humans have to do to survive on the cyber-battlefield of tomorrow?

We've been focused on life and health, because too often we take these for granted.

Part of not taking things for granted we've been doing things outside our comfort zone: as in outside of our regular routine. We'd met John Burns, aikido sensei, when we were on holiday in Provence and had been invited to attend a seminar he was holding at his dojo: Chishin Dojo.

So last Saturday saw us bright and early to drive to Coventry.

I used to be a very keen aikidoka, a practitioner of aikido, and I was once a sempai, senior student, to Tom & Maria Helsby of Brighton Airenjuko. After I went to London, I then practiced with Sue Smith and Chris Reid of Airenjuku Dojo.

However, I haven't practiced aikido for at least fourteen years. The last time I was on the mat was to go to a course led by the late Mr. Smith.

Therefore, it's fair to point out it's an understatement when I say, it was a bit of a thing to step back into a dojo and practice again. I have to admit that I did step off the mat on a couple of occasions to catch my breath and take a drink of water, because it was just a little bit demanding, and I'm older now and out of condition.

We drove back late on Saturday and got up on Sunday to shoot in a short metric championship. Yes, that was a thing. We were both stiff as a board, and the weather was abysmal. Needless to say neither of us shot our best. I even recorded a personal worse score.

However, last week I did write words. My records show 2,744 words.

New words. Words so fresh that no-one has seen them apart from me. I've also worked through what was blocking my progress on the next installment of my The World of Drei series. So double yay!
Posted by  Ashley at 15:28 No comments: