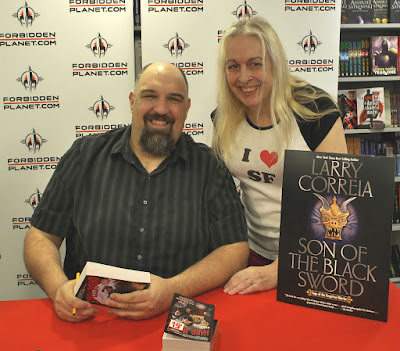 Larry Correia was at Forbidden Planet today signing his new book Son of the Black Sword and any of his other novels that anyone wanted signed.  I've really enjoyed his work ever since I bought his first novel Monster Hunter International.  I can tell you how much I liked it by how many times I've re-read it, and though it's very much a first novel with all that entails, the story makes me laugh out loud.  Everything he's written since has just gotten better as he progresses as a writer.

So it was a real pleasure to meet him at Forbidden Planet and press the flesh and get a few books signed.  I was also very fortunate to meet his lovely wife Bridget,  and I got to schmooze Jim Minz or should I say he very kindly talked to me and I told him about my novel and I said,


It's VOTOMS meets Stargate as if John Ringo were writing an Arthur C. Clarke novel.

Which is now the official elevator pitch of my novel after Jim said that sounded interesting.

So, I came home with copies of Hard Magic, Spellbound and Dead Six, the latter written with Mike Kupari, all signed by Larry, who was really nice and took the time to chat to everyone.  I also picked up a copy of the novel Shooting the Rift from Baen Books by my long time friend Alex Stewart.
Posted by  Ashley at 17:12