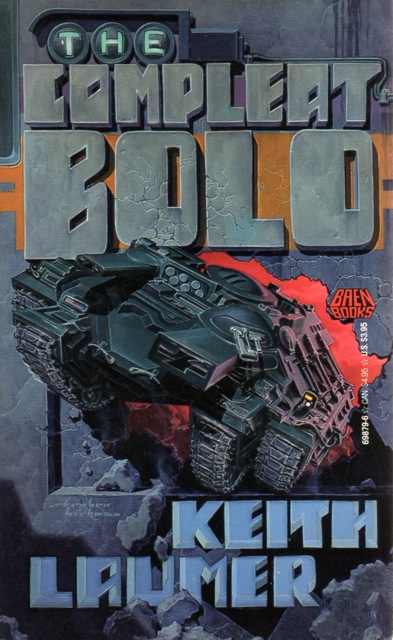 The Compleat Bolo by Keith Laumer is one of those books that anyone who has an interest in military science fiction refers to. The eponymous Bolos are giant self aware tanks, which can also be referred to as cybertanks.

To say that these stories are seminal to military SF is understating their importance.

Regardless of what one might think about the literary merits of classic SF, and the Bolo stories are rooted in sixties science fictional sensibilities. But their impact on the genre can be summed up by the fact that both TVTropes and Wikipedia have pages on the series.

I have my treasured copy of this book from 1990. And if you know me, you will know that I had to downsize my collection in the mid-nineties. This was one of the books I kept.

Anyway, The Compleat Bolo is a compilation of two previous Bolo books, and runs to 314 pages, about 110,000 words.

The two previous books were called, Bolo: The Annals of the Dinochrome Brigade, and Rogue Bolo.

If you want a critique of the Bolo stories then I'm afraid you'll have to go elsewhere. I read for enjoyment, and these stories are still bringing me enjoyment nearly thirty years on. So much so, they have inspired me to write my own take on artificial intelligent tanks, and that I think that says it all.
Posted by  Ashley at 12:14