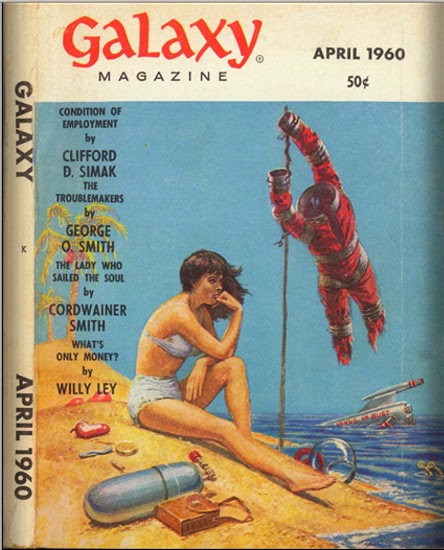 The above illustration is apropos of my previous posting about Cordwainer Smith, this being the magazine where I read The Lady Who Sailed the Soul all those years ago.  The image on the cover enthralled me, and I found it while reading this blog, which is doing something rather interesting by posting commentary on old SF magazine stories, from the late fifties onwards, as if they were being read in real time.

I've been away at the British National SF Eastercon, Dysprosium, and I will be writing a report soon.

In the mean time I've spent my time entertaining friends and winding down after four days of fun, and having to deal with three to four hundred emails that were waiting for me.  It seems that there has been another explosion of fannish outrage on the internet while I was gone, which can best be summed up by reading Peter Watts' blog.

As for me I've been having far too much fun, see above.

My only concerns were would I be able to finish the first revision of my second novel before going to the convention.  The answer is yes.  I managed to do a rough edit of the remaining 36,000 words of Strike Dog by late Thursday night.  So last week was a productive one, and I for one can't ask for more than that.

Today I rode my refurbished Riese & Müller Birdy folding bicycle around my housing estate, which enabled me to check the brakes worked, and that the new chain was seated properly; as in it wasn't going to go spoing on me as it split into two parts while riding somewhere.  So all excited at the prospect of fun summer cycling.