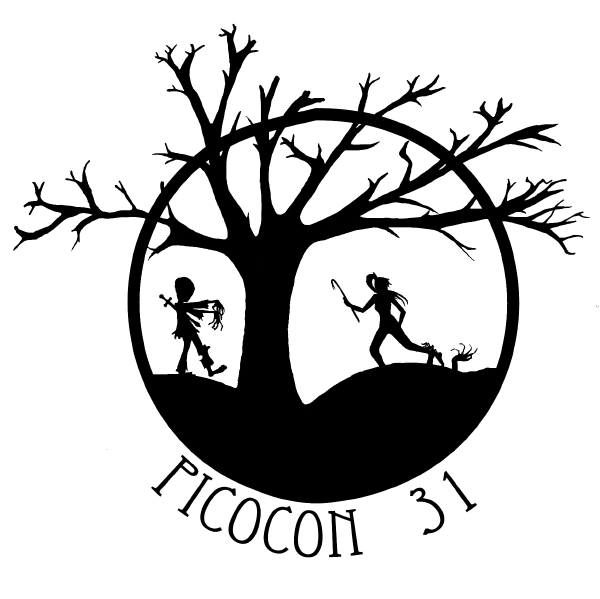 Usually on a Saturday my routine involves backing up my computer, but this weekend it was up early and off to PicoCon 31, held at Imperial College by the ICSF club.  A one day convention that has been a regular event that I try to attend each year.

It's like an old friend one revisits to catch up with.  Also bumped into Jainne Fenn and her partner Dave too, and helped her and Sarah Pinborough on the GoH question panel where all was on the line to win a bar of chocolate*.

Truth be told I've been coming down with a bug this week and Friday evening saw the first symptoms expressed with a hacking cough coming from yours truly.  All things considered I feel better now that I'm trying to cough my lungs up than I have all week while I was fighting the bug off.

This has impacted work with only 1,459 new words written, bringing the total WIP up to 38,957.  I've pretty much had negative word totals all this week as I've been editing and revising the parts of this novel that were my original first draft; this has been quite disheartening at times.

More about this book next week when I hope I will have finished reading it.  I'll just say one thing though, and that it is really expanding my mind with oh gosh wow I wish I had thought of that ideas.

Meanwhile we are now watching Game of Thrones after finishing Ashes to Ashes, which made me cry with its tear jerker of an ending.  GoT TV series is in my opinion a bit like how the story of the Princess Bride is described; the best bits version.

So a good week for getting out and seeing people, not so good for work and health.

*The question asked of the panelists was what do you see as the outcome of data mining, which stumped Sarah and Jane, it was clearly a question formulated by someone who knew Charlie Stross would be on the panel.  I did my best Hermione Grainger impression and helped Jane and Sarah who were clearly stumped, but equally outraged that the question came with the announcement of chocolate for the winners.  I did my bit, and was duly rewarded with chocolate.  We women have to stick together when chocolate is mentioned.