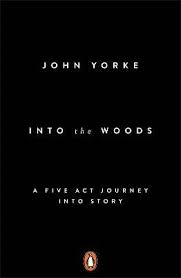 This is going to be me pontificating about John Yorke's Into the Woods book that has the subtitle of A Five Act Journey into Story. As I said before I found this book a very involving read that presented a compelling argument about the nature of stories, namely that they must have a beginning, middle and an end, which seems kind of obvious.

However, what is discussed is that what makes the middle of the story so important to the reader is the structure of the story; namely the acts that a story is broken down into.

What John Yorke discusses is that the modern three act structure is rooted in the older Socratic five act form, and that to understand that the drama comes from understanding the psychological necessity for the mid-point.

At least if I've understood him properly that is? I'm sorry if that sounds a little quizzical, but given the academic nature of some of the arguments being discussed, more summary and less footnotes to support the thesis, antithesis and synthesis of the necessity of acts as part of the structure of story would have been a good thing.

I have one final quibble with the authors use of Freud and Jung to underpin his arguments for the development of characters in stories.

Namely that psychology has come on a long way since the days of Freud and Jung, and that their work doesn't meet the criteria of being evidence based and open to scientific testing.

However, I learnt a lot of things about story structure, the necessity of acts and their purpose that I wholeheartedly recommend this book to anyone who wants to be a writer. It is that good.

Email ThisBlogThis!Share to TwitterShare to FacebookShare to Pinterest
Labels: Non-Fiction, Writing About Writing