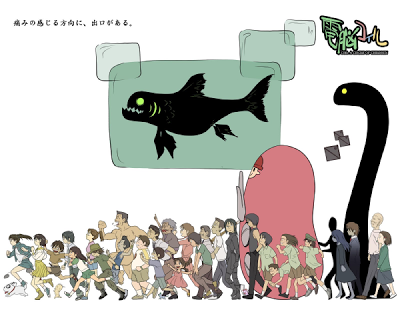 This week we have been watching Japanese anime to wind down in the evening.  As you may be guessing I watch a lot of films on disc, and have a fairly extensive collection of films and TV shows to watch in an evening.  What attracts me most to the visual story telling medium is the dialogue, which is always inspirational when something pithy is said and sticks in one's head.  It certainly makes me try harder to write snappy dialogue in my stories, though I suspect I fail more often than I succeed.

So this week it was Denno Coil, which I can sum up as Enid Blyton's Fantastic Five meets the Matrix.  This might put you off from watching it, but quite frankly I was totally charmed, bewildered and fascinated in equal turns throughout.  The use of virtual reality overlays on real surroundings through the use of Google Glass analogues, and the childrens exploration of their world was enchanting.  A very dark story for its target audience too, which only goes to illustrate the cultural differences between the West and Japan.  As a follow-up we are now watching Girls und Panzers, which is a light and froth tale where the conceit is that driving tanks is the equivalent to flower arranging; again very Japanese.

Reading wise I currently working my way through two books.  The first is non-fiction and is called You are not so Smart by David McRaney who has a blog.  It is a collection of essays on why we as humans make so many mistakes when it comes to the way we think about things, and I highly recommend that you all go out and buy a copy as it's that good.  No really, stop reading this and go buy it now.  It deserves a longer post than this, and I'll write something longer on my CBT blog when I get around to it.

The other book is Star Corpsman: Bloodstar by Ian Douglas, is the first in a new series about Marines in space.  I've enjoyed reading his other USMC in space books in the past.  It's certainly an engaging tale, but I'm finding some of the story telling structure intrusive.  This may just be down to me be more critical of his writing now that I'm writing myself.

Finally, my writing log for this week shows that I wrote 10,614 words, which is not to be sniffed at, except by my computer that tells me I failed to meet my targets to finish the first draft on schedule.  This month I've written a total of 36,067 words and the first draft of Strike Dog stands at 76,803 words.

Last night, while snuggling in bed with my partner we were talking about the new chapters I'd written this week, which I got me to start thinking about the next story.  I didn't fall off to sleep easily last night because of that as ideas swam around my head, kicking down doors and just demanding I pay them some attention.  Needless to say when recounting this at the breakfast table this morning in the cold harsh light of dawn (9.30am, but it felt like dawn to me) it all seemed a bit less than the awesomeness I had in my head last night.  Still I'm going to go now and make some notes.
Posted by  Ashley at 11:44