I like to think about stuff, I guess it goes with the territory of being a writer, or perhaps not.  Maybe it's just because I like thinking about stuff.  One thing I was taught on various courses was the importance of theory and the need to put it into practice, because to paraphrase Kant; Theory without practice is meaningless, but practice without theory is blind.  What I think is that one can apply this to looking at the following:


All of these I have seen, or heard being described as starting places in opposition to each other.  However, it seems to me that if you took the above and put them into a drawing like this then they can be seen for what they truly are. 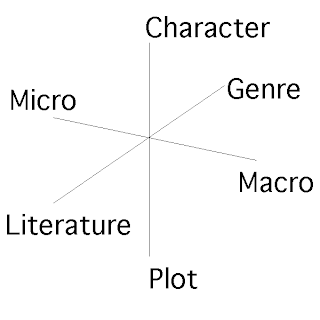 These points are not mutually exclusive things, rather that they are on continuums plotting the progress of discrete changes as one moves from one end to the other.  It is only when you looked at them in isolation do they generate extremes, and in my experience taking extreme positions leads to less tolerance of diversity and acceptance of differences from one's own view as being equally valid.

I might come back and kick these around a bit another time as I think there are some rather interesting assumptions going on as the relative merits of each with some things seen as more valuable than others.  All inspired by the course I talked about here.

This article was inspired by my weekend Guardian Masterclass on the Fundamentals of Fiction run by the award-winning author Tim Lott, where he discussed the six points in my three axis drawing.
Posted by  Ashley at 13:41

Email ThisBlogThis!Share to TwitterShare to FacebookShare to Pinterest
Labels: Writing About Writing