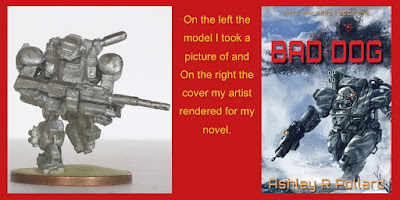 I make models, I just do. It's my thing.

I've also been known on occasion to play games with them. Above is the model reference picture I sent to the artist who drew my cover for Bad Dog. I have made up several models of my CASE-2X Dogs, each of them a representation of one of the characters combat armour suits in the story.

As I made the models, I found ways to make each a little more interesting through slight variants in the pose or choice of weapons. The Dog here is the second attempt of capturing Sergeant Tachikoma's ride in Bad Dog. 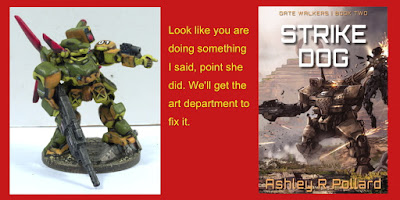 And this is the picture I sent my artist for the cover of Strike Dog.

Because Tachikoma is now a Lieutenant she gets to ride in a CASE-2XC command variant. As you can see, I added antennae to the back of the Dog, and changed the head of the suit too. I added the shoulder mounted missile pack to match the description in the book.

Things got changed for the cover, but I'd rather have a dynamic cover to sell the book than a precise representation of the model.

Below is one of the pictures I've sent to my artist as reference for making the cover of Ghost Dog. On the left is Master Sergeant Ferretti's Air Force security Buster CAS-C4P. It's a glorified mobile command-and-control center for running combat androids. 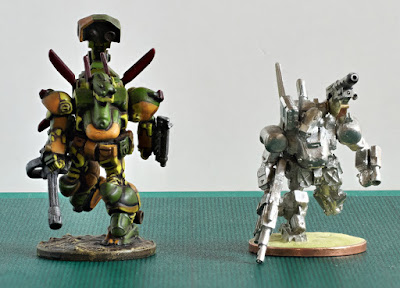 On the right is Captain Tachikoma's upgraded CASE-2XC-Mod-2, special forces command variant. Making this has given me ideas for CASE-2X-Mod-2 models I could make.

I can't wait to see what the cover will look like.

Last week was taken up with things other than writing stories. For example, I spent two days writing an article for the Galactic Journey blog. They always take time, because of the research I have to do, and finding suitable pictures.

I then drew up a brief for the Ghost Dog cover, and started talking my artist about what I wanted. Which is what inspired this blog.

Despite all that, I manage to produce 1,275 words in the spaces between doing all the other stuff. I didn't keep a precise record of the time, but about two hours typing, so an average of 633 words per hour. Mostly done in fifteen minute segments.

NB: For those of you who my be interested in my model making you can see more here.
Posted by  Ashley at 09:36