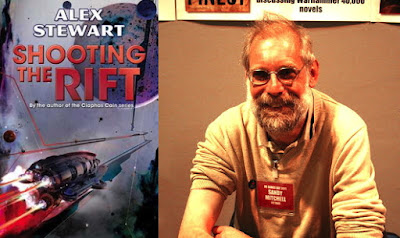 It's no secret that Alex and I go way back.  I really enjoyed his latest book Shooting the Rift, so much so that I asked my friend to tell us a bit more.  Just a few questions to promote him and his work.  I hope you all enjoy getting to know my friend and colleague more, and now without further ado...

Tell Us About Yourself?

Alex Stewart, and sometimes Sandy Mitchell, the pseudonym I've used on my Warhamer 40.000 novels for the Black Library. Addicted to SF since being introduced to it at an impressionable age by my grandmother, who never missed a Godzilla movie or an episode of Thunderbirds. Professional writer since the mid eighties, when my first short story appeared in issue 2 of Interzone - the first debut story they ever published.

What’s The 140 - Character Story Pitch For Shooting The Rift.

There aren't 140 characters in Shooting the Rift; that's a bigger cast than War and Peace!

A young exile tries to make a new life for himself and prevent an interstellar war.

Where Does This Story Come From?

Pretty much everything I've read and enjoyed over the years, filtered through my own perceptions and life experience. The same thing every writer does, I suppose.

What Makes This Story One Only You Could Have Written?

The second part of the first sentence above, I guess. Science Fiction in its current incarnation strikes me as very much an American genre, so approaching some of the standard tropes from a British cultural perspective, while retaining the narrative vigour and sense of optimism of the US model, was an interesting challenge.

What Was The Hardest Thing About Writing Shooting The Rift?

Finding the right narrative voice. After doing so many of the Ciaphas Cain books in the first person I really wanted to use third person for this one, to distinguish it from my Black Library novels, and went through several abortive attempts at the early chapters. It was only when I threw in the towel and finally let Simon tell the story in his own way that it really started to gell.

What Did You Learn From Writing Shooting The Rift?

To trust my characters more. Or, to put it another way, follow my instinct rather than over-think the narrative technique.

What Do You Love About Shooting The Rift?

It's the first novel I've written to a publishable standard that's entirely my own work. Much as I love playing around in the 40K universe, which is a fantastic and infinitely versatile setting, and wonderfully textured, there's a lot of satisfaction in having done my own worldbuilding this time round.

What Would You Differently Next Time?

Every story's different, with its own demands; so, everything. On the practical side, try not to push the deadline so close. (But I always tell myself I'm not going to do that, and I always do.)

Give Us Your Favourite Paragraph From The Story.

I can't: to me, they're all interrelated. It's like asking which is your favourite girder in the Forth Bridge.

A light-hearted fantasy novel for Baen, with the working title of "A Fistful of Elven Gold." After that, a new 40K novel in the Ciaphas Cain series, then whatever I can successfully pitch.