The last week has been one hell of a roller-coaster ride for me.  I started off at the bottom in the pit of despair (cue Mel Smith doing raspy voice) of facing another week of editing Strike Dog.  As I write this I record that I managed to edit 29,294 words, from eleven chapters, and managed to my usual couple of blogs that came to just under 700 words.  So the week ends on a high.  What a rush.  Could have done without the low though.

I did get a bit distracted by having some pieces of the puzzle of my fourth novel in the Bad Dog series click into place.  So I spent some time making notes and pulling information from my universe bible into what had been mostly a blank Scrivener document with the title Red Dogs.  As always I should add that these are working titles, who knows what the stories will be called when/if published?

Moving on I want to wade into the debate on whether Pluto is a planet or not.

I'm old, so for me Pluto has been a planet all my life and it therefore feels wrong to reclassify it as a dwarf-planet or Plutoid/Plutinoid.  However, when one looks at the evidence behind the decision to do so I can see why it was done.  The first picture explains where we are and what we know about Trans-Neptunian worlds. 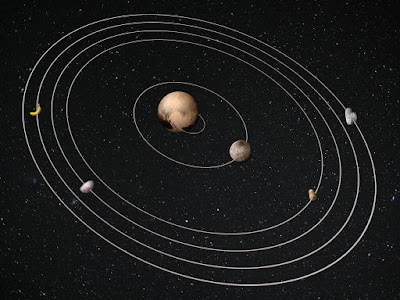 However, what I find most intriguing, and an order of magnitude more important than the arguments over Pluto's status as a planet is shown in the picture above.  Pluto forms a binary system with Charon.  Unlike the Earth and Luna, where the orbit that both rotate around lies within the diameter of our planet.  Whereas the Pluto and Charon orbit around a barycenter with the other moons making Pluto unique within our Solar system.

This discovery I think more than makes up for any sentimental reasons for calling Pluto a planet.  Instead it is its own dwarf-binary system.  How awesome is that?
Posted by  Ashley at 14:44