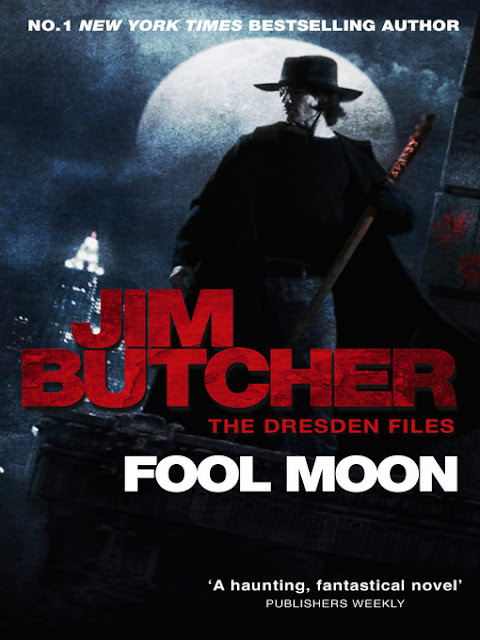 I finished reading Fool Moon, the second book in the Dresden Files, a series that I have gotten into recently.  I started reading it last weekend, and while I was enjoying it I put it down and only finished it this week.  I think that the first half of the book sets out a lot of stuff that rounds out the world of the Dresden Files, but was mostly exposition, and while stuff got interesting the first half of the book didn't grab me.  However, the second half of the story the shit starts to get serious, and things go down hill for our hero and his friends.  What Butcher was then able to do was ramp the action up to eleven.  From that point on the book became unputdownable.

So yes I finished it, and yes I plan to go out soon and get the next one in the series.  I was really impressed with the writing.  The first book is good, but this is even better.  At this rate I'll be hooked, and a fully paid up member of the Jim Butcher fan club.  If I were a member of this years Worldcon I'd seriously be thinking about voting for his Hugo nominated book Skin Game.  And I tell you why.  I'm a fairly hardcore hard SF fan who likes a bit of Space Opera, and Cthulhu, but urban fantasy has to be really good for me to want to read it.  The fact that I want to go out and buy more books in this series is evidence that Jim Butcher can write interesting and engrossing stories that are outside of my usual taste.  For me that says volumes about him as a writer.

We also rewatched Mad Max 2 aka The Road Warrior, and Jurassic Park this week.  I bought Blu-ray copies cheap off Amazon.  I thought with the new sequels/reboots we ought to watch the originals first.  Both films stood up remarkably well.  Mad Max is thirty-four years old and still sets the benchmark for post apocalypse car mayhem.  Some of the CGI is a little dated in Jurassic Park, but ickle pooh dinosaurs FTW.  Then sharp teeth and claw action from less cute velociraptors, and of course the star – Tyrannosaurus Rex saving the day.

We have just finished watching season four of Lois & Clark: The New Adventures of Superman.  At times the stories crossed the line from silly into cringe inducingly bad, but somehow the show managed to stay true to its core values, which were the relationship between Lois and Clark.  After a considerable break we have also restarted watching Xena Warrior Princess.  Season three and the first three episode of season four were what I'd call hard work.  However, as we move more into season four the stories have gone back to the basics that make the show work; the relationship and adventures of Xena and Gabrielle.

A lesson to be learnt.  Stories are all about the characters.

Writing last week went well.  I managed to edit 9,803 words of Strike Dog, which is five chapters further along to my goal of finishing it.  At the same time I worked on radio call signs and other stuff, to make sure I'd used military phonetic shorthand correctly.  So all-in-all not a bad week.
Posted by  Ashley at 14:19