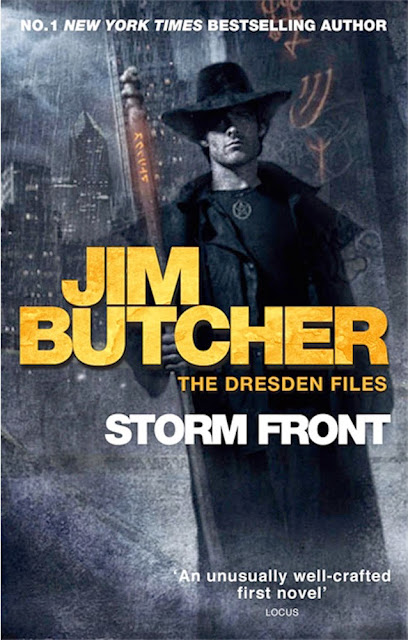 I'm running two days late this week in posting something on my blog.  I've been ensconced in my writing.  Well maybe not exactly ensconced, as it hasn't been totally comfortable, but there's the satisfaction of finishing something that I found hard to do; and for once being relatively happy with what I've written.  So I finished the first draft of the new chapter one of Strike Dog, having managed to write 1,146 words yesterday afternoon.  When added to my running total for the week this makes 3,382 words written in total.

So I'm pleased to have gotten this done.  It has been difficult for me, because I still have my head in the re-writes of Bad Dog, where I'm in a holding pattern while my new Beta readers do their stuff.  My plans for the long late May Bank Holiday weekend is do some model making, and read some books.

Talking about reading I've have finished Storm Front (Book 1 of The Dresden files) by Jim Butcher, and thoroughly enjoyed it.  Given that it's urban fantasy, which is usually not my thing, this says a lot about the writing and story telling.  It's definitely a story that makes one want to keep turning the pages to find out what happens next, and I like his writing style, it's easy to read.  The main character is interesting, and there are a lot of promises of other stuff going on in the background that makes me want to read more.  Next time we're in town and can drop into Forbidden Planet we'll pick up the next book in the series.

I've also read Andromeda's Fall by William C. Dietz, which is a novel I've had sitting around on my to be read pile for quite some time.  Probably over a year in fact.  It was bought on one of our visits to Forbidden Planet when we were looking for novels with a female protagonist.  My partner read it, and then it got put in a pile to be read and forgotten about.  I enjoyed it, and it certainly rollicked along, but I have to wonder at some assumptions American authors have about the nobility and class.  Still it was nice to see the French Foreign Legion in action in space!  Again I shall also be looking out for the sequel in due course.

I've also just started reading Max Tegmark's book Our Mathematical Universe.  This is a big hardback that basically expands upon the ideas found in his articles on cosmology written for magazines like the New Scientist.  This book allows Dr. Tegmark to lay out his ideas on the nature of reality, and expand upon the idea that we live in a Platonic multiverse.  It's written in a simple to understand and straightforward manner, for what is rather mind blowing stuff.