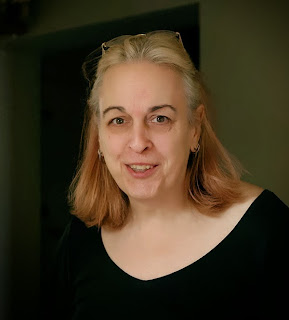 As you can see I've gone blond, and I'm not sure whether to stay blond or go back to being a red head.  Neither is my natural colour, that is sort of auburn, or was, but now with a large dose of grey, hence the assistance from my hairdresser.  So purely in a sense of fun what do my readers think?

This week turned out to be a good week for banging those words out and progressing the third novel.  Three chapters sent to my alpha reader, the first of which blew her out of the water.  Not literally, but she was at a loss for words.  So the weekly total was 9,693 making the running total 83,564.  Checking back on my previous two works I'm now at plus one week over the time it took to finish the previous novel.

Still reading A Game of Thrones, with 168 pages to go.  I finding it okay, but it drags a bit for my tastes.  Not that it isn't a good read, but it's not my thing; a certain lack of rockets, robots, or ray-guns.

This week we watched Warehouse 13 season 4.  The start of the season didn't grab me, but it improved, as in it went back to what it did best and so the season ended quite well.  My complaint here is that the show tried to deal with quite serious themes, but the scripts and actors couldn't carry the weight within the format of what is basically a very light hearted family show.

As an addition I see that Doris Lessing has died.  I had the great honour of being her minder at 45th World Science Fiction Convention held in Brighton, chosen purely on the grounds that I wasn't going to go all fan googly all over her.  I remember her as charming woman who was rather bemused by the idea of being invited to the convention, who enjoyed talking to people.
Posted by  Ashley at 15:01