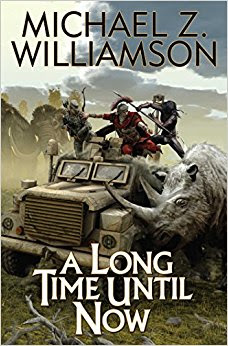 After finishing the Grimnoir Chronicles I started reading Michael Z. Williamson's A Long Time Until Now.

Some of my friend's don't like American libertarian science fiction.  I've often expressed the opinion that I don't like science fiction which espouse communism.  So I understand that certain ideologies can put readers off.  However, on reflection, after an email exchange with a different friend, I would recognize that both are in essence science fictional utopias.  One based on individual freedom, the other based on communal sharing.

In my professional capacity as a cognitive behavioural therapist I think neither can be implemented, because it would require an evolutionary change in homo sapiens sapiens genome to effect either.

Having skated around politics, lets move back to the text.

Williamson's latest book is in my mind not as good as his Contact with Chaos story.  However, A Long Time Until Now shares a lot of the things that made his other book very interesting.  The description of paleolithic life and arising social structures within a science fictional framework displays a stunning knowledge of history from extensive research.

What let it down, for me, was its length, and the ending.

A Long Time Until Now is a long book, and while I didn't feel it was too long or poorly paced, the story does take it time to unfold.  The bigger disappointment was that the ending didn't quite nail it, because I was left wanting to know more, but its pretty clear there won't be a sequel.

Saying that, I would recommend getting it anyway and reading it for the masterful research.
Posted by  Ashley at 11:01